(Image by Unknown Owner)   Details   DMCA
It's that time again. Tax time. Late nights culling through receipts. Panicked phone calls to CPA's or navigating through tax software. Everybody is anxious to minimize any taxes owed without triggering an audit. The fear of the audit is a mighty stick that the IRS carries to insure compliance. Just 2% of taxpayers are selected. I've had the privilege.
The IRS looks for inconsistencies. Years ago when I went from a self-employed status to employee status, it raised a flag along with a half dozen other areas on the return. I brought in 2 file boxes full of supporting documentation and spent nearly three hours with the agent. I was relieved to discover that she didn't actually have horns growing out of her head and I saw that she was just doing her job of making sure that everything was accurate, balanced and reported according to the regulations. It's not easy -- Title 26 (the tax code) runs over 15,000 pages. Happily for me everything on my return was in order.
Living in a free society doesn't mean that we get to do whatever we want to. There are rules, laws and guidelines that balance the need for individual creativity, liberty and self-expression against the interests of society at large. 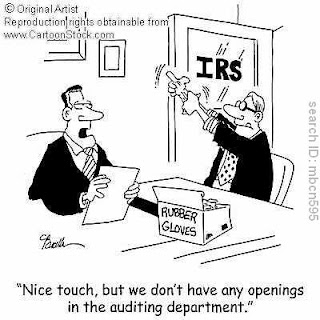 (Image by Unknown Owner)   Details   DMCA
In business I have guided clients (individual, corporate and not-for-profit) through tax season and have served as the liaison with outside auditors. The tension of wanting to do the right thing while not being taken advantage of is common to all. If we don't like it then we have the right to elect representatives who will re-imagine and re-regulate society in a different way -- but until then, we have the system that we have. The constant is vigorous debate with a lot of posturing. No matter one's political leanings, taxes are a fundamental part of the obligation of being an American and it is appropriate for a governing agency to insure accuracy.
Wesley Snipes and Richard Hatch (of Survivor fame) are two of the more recent high profile tax scofflaws who have actually been jailed for noncompliance. Let's not forget Al Capone was also done in by the tax man. Fining somebody to the hilt seems to be a more appropriate punishment than depriving them of their liberty. The goal of taxing is to generate revenue for the state and that can't be done if the rest of us wind up paying to house and feed people who are still not paying taxes. Jailing tax avoiders is simply not cost-effective, it's counter-intuitive.
The Government Accountability Office is an independent, nonpartisan agency that works for Congress. Often called the "congressional watchdog," GAO investigates how the federal government spends taxpayer dollars. The results for just some of the agencies  speak for themselves (direct quotes): 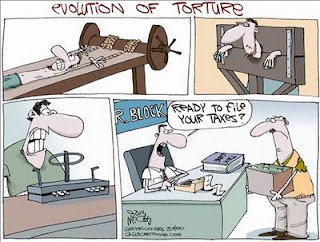 (Image by Unknown Owner)   Details   DMCA
The Defense Department itself has such extreme financial management weaknesses that they have yet to achieve audit readiness. In 1990 Congress demanded that the Pentagon get its books in order. For more than 20 years (4 Presidents & 7 Defense Secretaries) the Pentagon gives the same answer as Robert Gates gave in February: "Because of DOD's size and mission requirements, it is not feasible to deploy a vast number of accountants to reconcile our books." The need for audits isn't just a good government practice; it's actually a requirement of that pesky little document, the Constitution. Section 9 states "receipts and expenditures of all public money shall be published from time to time."
The ironies are rich. The agency that is tasked with making sure companies and individuals file and pay their taxes properly can't balance its books! The Defense Department that is supposed to defend the United States can't even defend itself with an accountant! The sad reality is that these ironies are making us poor.
We are a lesser people because the Government can't identify and report on where the money goes. How can there be any serious discussion about budgets and deficits when for huge chunks of the Federal Government we can't even say how the money raised, printed and borrowed has been spent? This isn't a partisan issue. It's a common sense one. We are not just out of balance, we're off balance because the discourse has been about spending and cutting instead of understanding where the money actually goes.  Happy Tax Day.
For more blogs by Craig Coogan:  www.craigcoogan.blogspot.com
To learn more about the author:  www.craigcoogan.com

Craig Coogan is a strategist, entrepreneur and commentator who examines issues with his unique perspective.
Related Topic(s): Accountability; Accountability; Fraud; Fraud; Fraud; Government; Management; Management; Money; Money; (more...) Pentagon; Pentagon; Taxes; Taxes; Taxes, Add Tags  (less...)
Add to My Group(s)
Go To Commenting
The views expressed herein are the sole responsibility of the author and do not necessarily reflect those of this website or its editors.