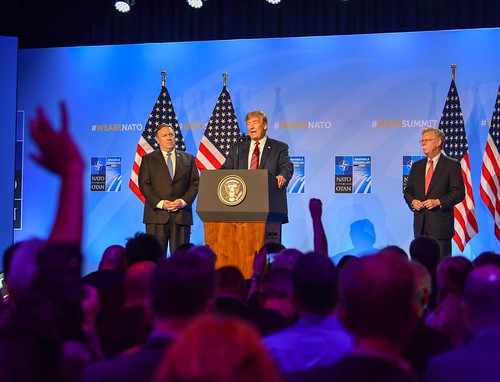 The Western world has an unusual way of practicing diplomacy, and this was aptly summed up recently by Iranian President Hassan Rouhani:

"You sanction the foreign minister simultaneously with a request for talks," he said, referring to Washington sanctions on Mohammad Javad Zarif.

"The White House is afflicted by mental disability and does not know what to do," Rouhani continued.

Well, that might be an exaggeration I'm not a doctor.

However, if it is true, then it's clear that the governments of England and France suffer from the same affliction.

But before getting to that, we are forced to clear up the latest example of Western Mainstream Media propaganda designed to portray Iran as troglodytic savages: it has been falsely reported that Rouhani used the phrase "mentally retarded".

This is a phrase which is no longer in vogue in the Anglophone world, though it was for many decades - it is now considered insensitive. The goal of the false translation is obvious: to portray Iran's leadership as cruel and - in something so very, very important to the neo-imperialist, Islamophobic, warmongering West - "insensitive". The West is fine with war, death and blockades, but nobody can come back from "insensitive" in the 21st century!

Firstly, "Political Correctness" is a fine, modern lens to view things through" but it is not the apex of political enlightenment and engagement. There should be much more anger over the disabled Iranians (and the disabled Koreans, Venezuelans, Cubans, etc.) who are victimised by Western sanctions on even humanitarian goods like medicine than over anyone's failure to use "disabled" instead of "retarded".

Countless Iranians have taken to Twitter and social media to testify that Rouhani did not use the word "retarded", but the false claim will likely live on in manufactured infamy.

This is not the first time the Western media has done this - all Iranians know that the turmoil over Ahmadinejad's alleged claim to "wipe Israel off the map" was another untrue, malicious translation created and avidly relayed by Iranophobic Western mainstream media. Retractions, not even tiny ones, are never forthcoming.

Whatever you call it - and I always give senior citizens leeway on not using the constantly-updating PC language - Rouhani's exasperation was clearly justified.

On June 23 the UK Minister for the Middle East at the Foreign Office, Andrew Murrison, held talks in Tehran. He declared his mission was to call for "urgent de-escalation". The Foreign Office declared, ""this visit is an opportunity for further open, frank and constructive engagement with the government of Iran."

However, the very next day Jeremy Hunt, the leader of the Foreign Office and Murrison's boss, fuelled speculation of imminent bloodshed by saying the UK would consider Washington's requests for military support for war on Iran.

I imagine that the Iranian civil servants who had just played host to Murrison wondered: why did they waste our time? They likely threw their work into the garbage. Indeed, ever since the JCPOA has been signed there is a widespread feeling that Western diplomats are just "wasting Iran's time", and not implementing any of the actions they promised.

Does not Murrison get his orders from Hunt? How can the UK and Iran have "constructive engagement" when diplomatic efforts are torpedoed from above less than 24 hours after they occurred?

Related Topic(s): Western Imperialism, Add Tags
Add to My Group(s)
Go To Commenting
The views expressed herein are the sole responsibility of the author and do not necessarily reflect those of this website or its editors.