Click Here to Remove All Ads
Republished from Macska Moksha 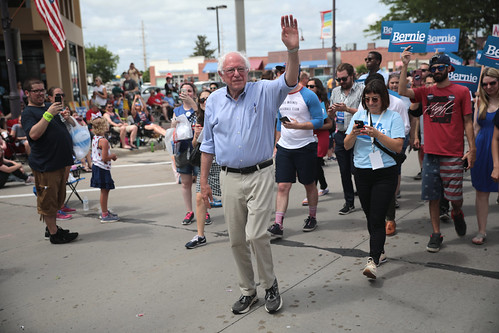 Bernie Sanders
(Image by Gage Skidmore)   Details   DMCA
I've gotta give it to Bernie and/or his strategy folks. "Not me, us" is the best political slogan I've heard in long time.

Seriously, all cynicism aside, those three words sum up what has to happen in order for Bernie to win and, if elected, to serve effectively. It has to be about people power, not just the power or inevitable weaknesses of one personality.

I do believe that Bernie has a good chance of moving into the White House. The huge crowds, the record-breaking fundraising, and the sheer enthusiasm of his supporters are unmatched in the field of candidates. This all counts for something.

But the road to the White House is an uphill battle. The Democratic Party leadership is opposed to Bernie and his policies, despite the popularity of both inside and outside the party. It appears they would rather lose to Trump than share power with their progressive base.

Expect more dirty tricks from the DNC. I suspect they are flooding the field with so many candidates in order to deny anyone enough delegates to win the first round of voting. On the second round as per their "reforms"the superdelegates can then step in and ensure that a corporate-approved candidate is installed.

How to fight tactics like this? Reduce the margin of error. Bernie's wins in the primaries and caucuses all have to be as big as possible. The larger the spread, the harder it will be for the DNC and the media to paper it over. The "us" in "not me , us" needs to hit the ground hard everywhere.

The DNC's friends in the corporate media are also doing their part by under-reporting Sanders and the impressive groundswell of support he has, and by misrepresenting his policies. This has been a teachable moment for many people who were too trusting of the corporate media previously, and that's a good thing. As with the primaries, getting his numbers as high as possible is key. That and getting people off corporate media, which is a habit to break under any and all circumstances anyway.

But it's not just about whether Bernie's supporters rise to the occasion. Is Bernie willing to give up "me" for "us"?

It's one thing for a candidate to add issues or adjust their stances based on popular opinion. Most of them at least pretend to do that. It's quite another for a candidate to buck the powers-that-be at the wish of their supporters. At the 2016 Democratic Convention, Sanders famously hushed his supporters, who were rightly protesting the shenanigans going down. That was a "me" not "us" move. Is he willing to fight this time if that's demanded by "us"? Even if he doesn't want to himself? This is where I'm skeptical. When it comes down to a fight, I'm afraid he lacks the cojones. But I'd love to be wrong.

If Bernie wins the Democratic nomination, more work awaits "us." Yes, Bernie outpolls Trump, but that's not the end of the story.

First, presidential elections are not a democratic process decided by popular vote. As demonstrated twice in the last twenty years, it's the electoral college that decides. It comes down to a handful of "swing" states, usually in the Rust Belt, plus maybe Florida. Voting in California, New York and other unassailable blue strongholds basically doesn't matter, or in the deep red ones of the South and Midwest.

Second, the United States does not hold free and fair elections. Votes go uncounted through fraud, voters are illegally stripped of their registrations, polling stations are unfairly closed down, and electronic machines with no auditable paper trails do much of the counting. Investigative reporter Greg Palast has been covering these issues tirelessly for years, and I summarized some of it in my piece, "Democrats: To Beat Trump, You Need to Buck Your Leadership." The long and short of it is that Republicans have been disenfranchising likely Democratic voters in the swing states for years with no pushback from the Democratic Party leadership.

How can this situation be addressed by "us"? By supporting all efforts to restore voting rights to the people of these targeted states, from sending help to local party activists, to volunteering on the ground in person, to making a donation to the Palast Investigative Fund so he can keep getting the word out. Palast has also been participating in lawsuits against states to restore unfairly stricken voters.

If Bernie wins the election, that's when the real work for "us" begins. There will be no honeymoon. The corporate Dems and the corporate media will be giving him hell starting Nov. 4th.

Executive orders are one way that a president can get things done quickly, but they can get undone just as quickly, as we saw with many of Obama's orders when Trump took over. Not that Bernie shouldn't issue any, but Congressional legislation is ultimately stronger. That Bernie understands procedure from his tenure in the Capitol building will certainly be helpful for navigating the process, but the most important factor will be sustained public pressure.

We cannot afford a repeat of the Obama years, when a lack of such pressure allowed grievous abuses to be committed against civil liberties (prosecution of whistle-blowers, legalizing Bush era abuses, expansion of surveillance state, militarizing police departments), the environment (increasing fossil fuel production to levels not seen since the early 70's, pipeline construction, sacrifice of wilderness to large-scale "green" energy projects, not prosecuting BP for the Deepwater Horizon disaster), health care (nixing the "public option"), the 99% (taking the side of big banks after the 2008 crash), activists (coordinating with mostly Democratic mayors to take down Occupy, standing aside from the violence at Standing Rock), voters of color (by offering no remedy when the Supreme Court gutted the Voting Rights Act), immigrants (kicking out nearly 3,000,000 people as "Deporter in Chief") and last but not least peace (continuing all of Bush's wars, adding Libya and Syria, expansion of operations in Africa, "pivot to Asia" aka preparing for war with China, commencing "modernization" of the nuclear arsenal rather than disarming, and the murderous drone attacks). He got away with all this with hardly a word of criticism. Given the dire state we're in now, I would personally characterize the Obama administration as the single most wasted eight year period in US history. We might very well have passed the point of no return on the climate while liberals were at brunch.