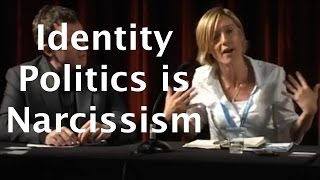 Identity Politics is the ideology of the liberal/progressive/left and the Democratic Party. Identity Politics teaches hatred of white people, all white people. An article last November in the student newspaper at Texas State University declared that white DNA is an abomination.

Americans, assuming that they are aware of this hostile statement toward white people, dismiss it as student silliness. They do not understand that it is the logical conclusion of the reigning ideology in America today. Naomi Klein, for example, writing in the current issue of Sierra, takes for granted the explanations of Identity Politics when she writes that the stakes in the 2016 election were enormously high for "those targeted by racist attacks as Trump fanned the flames of rising white nationalism ... to the prospect of women losing the right to decide whether or not to become mothers, to the reality of sexual assault being normalized and trivialized at the highest reaches of power."

Formerly, the liberal/progressive/left and the Democratic Party stood for the working class. In those days societal conflict was understood in class terms, and the capitalist was seen as the exploiter. Today the conflict is identity driven, with the white heterosexual male placed in the role as the exploiter of blacks, homosexuals and women.

The idea that power resides in the white heterosexual male is obviously erroneous. Imagine if the Texas college student had written that black DNA is an abomination or homosexual DNA is an abomination. The article would not have been published. But it is perfectly OK to denigrate whites. Indeed, white males have no protection against abuse, because they are not protected by quotas, political correctness, and hate speech prohibitions.

Whites are easily discriminated against, as the recent firing of James Damore by Google illustrates. Damore simply stated a scientific fact that males and females have different traits that suit them to different jobs. But this is a fact that is inconsistent with Identity Politics. Just as Trofim Lysenko managed to destroy Soviet genetics by denying facts, Identity Politics is destroying American society by denying facts. Ideologies are only interested in facts that confirm the ideology. When no such facts exist, ideologues make up the facts.

Americans, especially white people who are the target of the deadly ideology of Identity Politics and are placed by the ideology in the same position as Jews in Nazi Germany and capitalists in Soviet Russia, are unaware of the extent to which Identity Politics is now the dominant force in American culture. For example, as James Damore's lawsuit against Google proves, Google's corporate culture is 100 percent Identity Politics. Damore was fired because he challenged Identity Politics.

Read here for examples of the raw hatred that Google employees expressed against Damore. None were fired for hateful and threatening language that went far beyond Damore's mild statement that males and females have different traits. Google actually rewards employees for beating up on white heterosexual males and conservatives and holds diversity training sessions, the purpose of which is to put whites on the defensive. The whites who survive at Google are the ones who deplore their whiteness.

Clearly, Identity Politics has turned Google into a totalitarian organization, one that cooperates with police state agencies in restricting access to non-approved information. We must hope that a blockchain Internet soon replaces Google and that Google's stock declines in value to zero.

As the liberal/progressive/left, the Democratic Party, major corporate cultures, and the print and TV media have no compunction about attacking white people in the most threatening and hurtful ways, Amnesty International's Margaret Huang is clearly wrong when she declares whites, with gags in their mouths, to be the "emboldened and empowered violent segments of our society."

Listening to NPR last August confirmed what I already knew. Charlottesville is being turned into another nail in President Trump's coffin. NPR had no interest whatsoever in reporting the actual facts about what had occurred in Charlottesville. The several "interviews" with the like-minded were orchestrated to produce the desired propaganda result: It was all Trump's fault. It was Trump's fault for many reasons. He had stirred up White Supremacists and Nazis by appealing during the presidential election campaign to their supremacist views with his slogan "America first."

Of course, what Trump means by "America first," is precisely what the voters understood him to mean -- the interest of the broad American public should come before trade deals that serve the interests of other countries and the narrow profit interests of global corporations. However, the NPR propagandists put words in Trump's mouth and twisted the meaning of the slogan to be "White America Comes First."

In other words, "America first" according to NPR is code language to white supremacists to take advantage of the electoral college and elect a leader over the popular vote of the heavy population densities in the narrow geographical areas that comprise the northeast and west coasts, the centers of moral rot. Thus, Trump was the candidate of white supremacists and, thereby, illegitimate.

NPR next conveyed the message that Trump proved he was the Nazis' candidate when he criticized both sides for the trouble in Charlottesville. NPR used its orchestrated interviews to place all blame for violence on the group that had a permit for their rally. According to NPR, the group that had no permit and formed in order to protest the rally consisted entirely of white hats defending America from free speech by alleged Nazis and racists.

Related Topic(s): Deplorables; Diversity Politics; Hatred; Neoconservatives; White Male Effect; White Males, Add Tags
Add to My Group(s)
Go To Commenting
The views expressed herein are the sole responsibility of the author and do not necessarily reflect those of this website or its editors.