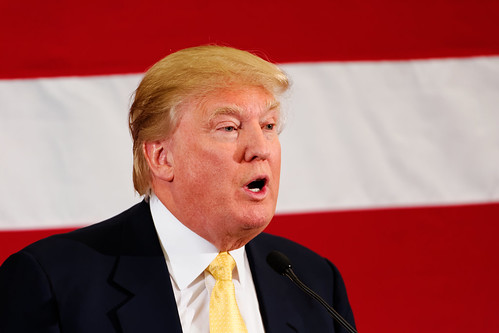 Politicians have always had an admittedly antagonistic, sometimes adversarial, relationship with truth telling. I'm the first to say that its human for political leaders to gets facts wrong from time to time, put their own "spin" on certain uncomfortable facts, and twist and bend the truth to suit their own political long and short term ends. I am not naïve to think that our political leaders are always pristinely honest or embrace pious puritan principles. After all, we're not electing people to political sainthood and we expect them to fall short sometimes. They're only human.

But I fear that things have changed in the political landscape, perhaps irretrievably so, for the worse. Lying is not the norm in politics and this 2016 Presidential Election cycle has confirmed our worst fears in this regard. It is neither routine nor normal for a political leader -- Democrat or Republican -- to tell the American people a brass-faced, crass lie and 24- hours later when brief, passing outrage erupts, behaves like Dr. Evil and says that "I misspoke." And should the outrage become sustained outside of the 24-hour news cycle, the same news outlets that first helped enable the lie in the first place, now backhandedly apologizes for said politician by saying that he or she "was now walking back" the statement.

The end effect of these carefully crafted lies, misspeaking, and walking back falsehoods, is a populace now thoroughly and completely confused bumping around in a sea of deliberate misinformation. Politicians no longer admit to lying since they could "misspeak." In this presidential election cycle the question is not if there are run-of-the-mill tale-tellers -- the standard political fare -- but what sparked the kind of political lying that is surpassed only by the propaganda spun by Josef Goebells, the Reich Minister of Propaganda, during the Nazi era.

To the ordinary American citizen and voter who has an inkling of interest in things political taking place in their homeland, there is always a glimmer of hope, if not a presumption, that people running for the highest offices in a city, state, federal and at the national level, should strive to tell the truth as often as they can. If this was the case then we can idealistically say that in America our politics has a set of rules and established behaviors that are binding on everyone -- including the news media that cover these political parties, contests and individuals.

But things are now so grotesquely misshapen in this political cycle that reasoned, organized consciousness, has not yet caught up with the magnitude of the changes taking place at warp speed in both political parties, their bases, and the percolating anger on both the left and right. Being "flat-footed" would be a kind characterization of the state of affairs. Indeed, the gaping disparity between the continuing political metamorphosis and the dissonance of truth is responsible for the perpetual fog of confusion that has so engulfed and confused the masses.

So in essence there are political untruth tellers and then there's Donald J. Trump. The outcome is that Trump has led a total and complete political putsch grabbing the Party of Lincoln by its neck shoving it kicking and screaming to the extreme right. Here's a strutting pseudo generalissimo who allegedly impersonated his own publicist in order to inflate his own sexual mythology, whose glaring ego and belligerent posturing renders him the well-earned caricature of a blustering nincompoop with the unique gift as antagonist against truth.

Mr. Trump's new age political perambulations are noteworthy for the sheer number and extensiveness of the falsehoods that concludes an adversarial and antagonistic relationship with the truth. His distortions of his opponents backgrounds, records and activities, his hilarious and comical exaggerations and half-truths, his embellishments of his own record, fantasy creations of events to suit his own narratives, and ability to repeat these lies and truth-bending memes over and over again without any repercussions makes Donald Trump a new political entity and sets him apart from all other politicians.

You see, for "other politicians" -- be they Hillary Clinton, Bernie Sanders or the elected members of the United States Congress or state leaders -- they usually have one or two areas of political shenanigans and dishonesty tagged to them. It is quite normal, for instance, for a politician to hide anything in their record that would be viewed with disfavor by the voters. Others still will routinely pad their resumes to bolster their favorability in the eyes of the electorate. However, no one in American political history has ever encountered a politician who lies so reflexively, so frequently, and blatantly as does Mr. Trump -- over and over again.

Should Mr. Trump become the next American president there is bound to be question marks about his trustworthiness and his ability to tell he truth. Indeed, the danger of a politician like Mr. Trump who has a flagrant disregard for the truth is that even when he's caught in a lie he continues to repeat it unendingly. For example, he's told his supporters, the news networks, town halls, and just recently the NRA that "Hillary Clinton wants to take away your Second Amendment Rights." He's been called out numerous times for this bold-faced lie yet he continues to repeat it and many of his supporters now unquestioningly believe it. Ole Josef Goebells must be smiling approvingly at such a star pupil!

To bolster his anti-Iraq war credentials Mr. Trump has said that he opposed the war BEFORE it began. That's completely false and yet he repeats it up to this day. This opposition to the Iraq war was a figment of Mr. Trump's fertile imagination and conjured up in his "reality TV" mind. He even went so far as to suggest that his non-existent opposition to the was so embarrassing to the Bush Administration that "I was visited by people from the White House asking me to sort of, could I be silenced because I seem to get a disproportionate amount of publicity."

And in the waning days of the Republican Party primary Mr. Trump uttered perhaps the most damaging and far-fetched falsehood of the entire primary season when he said that Texas Senator Ted Cruz's father was an associate of Lee Harvey Oswald the man who assassinated President John F. Kennedy. This utter fabrication, not supported by any facts, is the kind of lying that Mr. Trump gets away with because it is so outrageous and preposterous that people conclude that "Mr. Trump must be joking; its just politics."

The incredible thing is that Mr. Trump soldiers on even as polls rate him unfavorably at 60 percent and only 27 percent of Americans believe that he's trustworthy and honest. And too, this Pinocchio style of politics many have worked in the Republican Primary when ONLY registered Republicans could compete and caucus. The general election is a different beast when Independents, large swaths of women, and pissed of Bernie "bros and gals" can vote. That means that Mr. Trump will have to reach out to consistencies that he's systematically maligned, insulted and abused.

His die-hard supporters, long told to dismiss anything that the mainstream political class and its mouthpieces in the media says as lies and character assassination, are not expected to doubt Mr. Trump's every word. But convincing a more educated, sophisticated electorate to forget his lies will be a tall order. Still, day of reckoning is still some months away in November and a lot could happen during this time.

But I shudder at a Trump Presidency for a whole set of different reasons. If the man can lie with impunity before he's even elected what is going to happen if he does get to the White House? Right now Mr. Trump's truth benders are far-reaching and wide-ranging as they are breadth taking. Its not possible to find ANY areas that he's remained truthful and has not dissembled. And perhaps his biggest lie is that "America is in decline" so he's going to "Make America Great Again."

Related Topic(s): Lies; Microsoft; Military; Misinformation; Misspeaking; Politicians; Propaganda; Reality; Republican; Truth, Add Tags
Add to My Group(s)
Go To Commenting
The views expressed herein are the sole responsibility of the author and do not necessarily reflect those of this website or its editors.