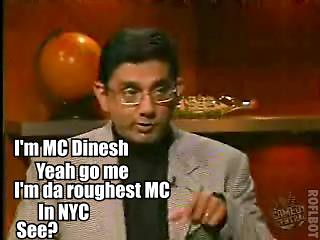 A couple years back, I wrote about conservative "intellectual" pundit Dinesh D'souza's controversial book, The Enemy at Home: The Cultural Left and Its Responsibility for 9/11. You may remember that the book received a drubbing not only from the aforementioned "cultural left," but also numerous persons on the right -- many of whom he took to task for their unhelpful Islamophobia -- and other persons who, irrespective of their political sides, shredded it as a poorly realized book.

I ruminated, then, as to whether Mr. D'Souza intentionally wrote a flawed book:

It almost seems like the book was disingenuously designed to draw ire from both sides of the fence. The Left hates it for obvious reasons, but the Islam-hating Right is equally incensed at being called out for their behavior. That, coupled with shoddy research, poor basis of argument and questionable conclusions, makes for a book that even the saner Right can't really defend, either.

But everyone will talk about it. And isn't that really what makes books fly off the shelves?

Well, Mr. D'Souza has gotten back in the saddle. After publishing a less controversial tract arguing for the existence of life after death -- perhaps inspired by his continual relevance after "The Enemy at Home" -- he has a new book on the horizon, entitled The Roots of Obama's Rage. And a teaser for it was the cover story of the most recent issue of Forbes, "How Obama Thinks."

So how does Obama think? According to Mr. D'Souza, he doesn't. Instead, he lets his deceased father do the thinking for him, after a fashion.

Incredibly, the U.S. is being ruled according to the dreams of a Luo tribesman of the 1950s. This philandering, inebriated African socialist, who raged against the world for denying him the realization of his anticolonial ambitions, is now setting the nation's agenda through the reincarnation of his dreams in his son. The son makes it happen, but he candidly admits he is only living out his father's dream. The invisible father provides the inspiration, and the son dutifully gets the job done. America today is governed by a ghost.

OOOOOO! Spooky. Also highly feculent, according to the Columbia Journalism Review -- amongst others -- who aptly described it as a "gross piece of innuendo -- a fact-twisting, error-laden piece of paranoia. This is the worst kind of smear journalism -- a singularly disgusting work." Their follow-up, inspired by D'Souza's snarky rebuttal, took even fewer prisoners.

But let's look at what D'Souza said in that rebuttal, shall we?

The story is adapted from my new book The Roots of Obama's Rage. Let me just say that if the Forbes article so upset these guys, wait until the book comes out. It may prove extremely difficult for the Obamorons to digest; perhaps it will have to be administered as a suppository.

So why did the article previewing the book so enrage the White House and the Obamorons? Because it provides a belated but desperately-needed explanatory framework for Obama. Finally we have a key that actually opens the lock. No, Obama is not a Muslim. No, Obama is not a socialist. The truth is far worse.

Overlooking D'Souza's seeming Islamophobia in that remark (Worse than a Muslim?) we have to marvel at his braggadocio. There are any number of books out there on the market, right now, that are warning us about Obama's dirty sekrit socialist agenda for America, and how we can fight back -- by giving the author your money and/or votes, of course -- but oh no, MC Dinesh has got that fake rapper all figured out. He wasn't raised in America, and his dad was a socialist and an anti-colonialist, and therefore Obama's a punk-ass foo who wants to depower America! WORD!

Except that his father was NOT a socialist. And Obama's time spent abroad, with his American-born mother, should not in any way detract from his understanding of his home country, or make it impossible for him to understand what America is truly all about. If the latter were true, then we might as well rubbish all immigrants at the door -- after all, they wouldn't "get it," either.

(Pamela Geller and Robert Spencer make a similar claim in their book, The Post-American Presidency. I guess Mr. Spencer and he won't be exchanging hate mail over this one, this time?)

So far arch-bomb thrower Newt Gingrich seems the only conservative luminary willing to go to bat for the cover story, though I suppose many Obama haters will probably be singing its praises. If, as D'Souza claims, his appearance on the Glenn Beck show drove the book's pre-release sales up to #5 on Amazon, he'll probably have a lot of love on October 5th.

Related Topic(s): Books; Dinesh Dsouza; Islamophobia; Journalism; Obama; Publishing; Reviews, Add Tags
Add to My Group(s)
Go To Commenting
The views expressed herein are the sole responsibility of the author and do not necessarily reflect those of this website or its editors.