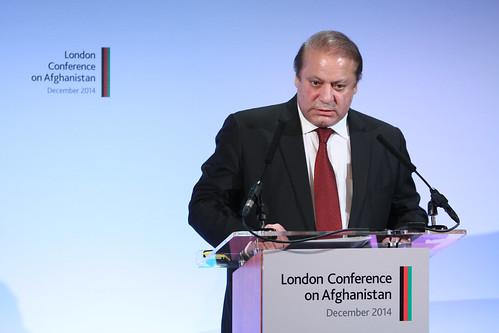 Prime Minister Nawaz Sharif received the diplomatic snub at the Saudi summit attended by President Donald Trump over the weekend . The US chief executive addressed at length terrorism's devastating effects on countries like India, Russia and Australia but did not mention the losses suffered by Pakistan as the front line state in the war on terrorism.

Nawaz Sharif attended the Trump event as the summit has come to be described, on the invitation of the Saudi king. Pakistan's delegation hoped for at least a pull-aside meeting between Nawaz and Trump with enough time to present a Pakistan dossier on the region, Kashmir included. But Nawaz Sharif was forced to settle for a mere handshake with Trump.

"Trump and Sharif shook hands and exchanged pleasantries", TV channels reported. During the exchange, Trump reportedly told Sharif that he was pleased to meet him. The Pakistani Prime Minister responded that the feeling was mutual, said a front page report in The Express Tribune, a leading English daily published in collaboration with the New York Times (NYT).

At the summit attended by leaders of 55 Muslim nations, Nawaz was expected to be a star speaker but he was not invited to address. Former Pakistani army chief Raheel Sharif, who heads the Islamic military coalition formed by Saudi Arabia, was not asked to speak either. "This is humiliation", leading newspapers bemoaned even as they are fuming at Trump's indifference.

The entire Opposition has slammed Prime Minister Sharif and has accused him of bringing disgrace to the country. Sharing the disgrace with him is British- born Pakistani barrister Khawar Mehmood Qureshi, though he has hit the headlines for a different reason.

A Queen's Counsel (QC) at Serle Court Chambers , London, Qureshi is bearing the cross for Pakistan's loss of face at the International Court of Justice (ICJ) in the La'ffaire Kulbhushan Jadhav case .

"Who hired the incompetent Qureshi", the Opposition is thundering. And the buck appears to stop at the door of the Foreign Office and Nawaz Sharif himself. Pakistan has no full-time foreign minister.

A blogger since July 2008 James Duglous Crickton is a London based consultant working with a consultancy firm focusing on Asia, particularly South Asia and East Asia. Political Research is his functional focus area. While his interests are (more...)
Related Topic(s): Arbitration; Army; Democracy; Intelligence; Investigation; Leaks; Musharraf; Pakistan Nuclear Program; Pakistani Power Pendulum; President; (more...) Rights; Sharif; Terrorism, Add Tags  (less...)
Add to My Group(s)
Go To Commenting
The views expressed herein are the sole responsibility of the author and do not necessarily reflect those of this website or its editors.