Great damage is being done, even as the Trump mob is targeted by Robert Mueller. 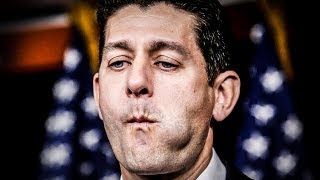 MILLIONS Of Americans Will Lose Their Health Insurance with GOP Tax Plan
(Image by YouTube, Channel: The Ring of Fire)   Details   DMCA

The wheels of justice might be turning with the guilty plea by Trump campaign and White House aide Michael Flynn and the reality that the president's' team are real targets, but that will not stop the GOP Congress and White House from gutting essential social safety nets.

The GOP tax plan, which passed the Senate 51-49 early Saturday with no Democrats voting yes, now moves to the phase where differences in the House and Senate bills get ironed out. That will prompt fierce lobbying and protests, but a major bill transferring wealth from the middle-class to the best-off Americans will be passed and signed by Trump.

If all the Republicans were doing was lining the pockets of the already rich, that would be bad enough -- pick your adjective. But that's not the endgame. Before the Senate voted, Senator Marco Rubio of Florida, a past presidential candidate, said the Republicans must make additional cuts to Social Security and Medicare, both federal programs for those over age 65 as well as people with disabilities and parentless children (such as Republican House Speaker Paul Ryan as a youth).

"We have to do two things. We have to generate economic growth, which generates revenue, while reducing spending. That will mean instituting structural changes to Social Security and Medicare for the future," Rubio told Politico.com before the vote.

That statement omitted that the Senate's $1.5 trillion tax plan would trigger a federal law, known as PayGo, which limits Medicare to 4 percent of the annual budget. It is projected to impose $400 billion in cuts to senior healthcare in the next decade The PayGo trigger will "undermine the delivery of care to the 57 million seniors and disabled Americans who depend on the program," wrote Max Richtman, head of the National Committee to Preserve Social Security and Medicare.

But even that attack on Medicare will not be enough for Republicans who want to return the size of the federal government -- apart from the military -- to what it was before the Great Depression of the late 1920s, which triggered Franklin Delano Roosevelt's New Deal, which created Social Security. The heir to that program was the 1960s creation of Medicare and Medicaid, state-run health-care for the poor and those in nursing homes.

"The tax bill is one enormous attack on our health," wrote Social Security Works' Nancy Altman and Linda Benesch before the vote. "It takes away the ability of those with large health-care costs to deduct those costs from their [annual] taxes. It repeals the part of the Affordable Care Act that seeks to make health insurance affordable. The consequence of that is $185 billion less in health insurance subsidies and $179 billion in Medicaid cuts. All so Republicans can shower huge tax giveaways to their wealthy donors. And those tax giveaways trigger automatic cuts to Medicare."

"The Republicans are trying to enact this assault on our health care as rapidly as possible while the American people are distracted by the holiday season," they continued, before the vote and Friday's guilty plea by Flynn. "When health care premiums go up, when Medicare gets cut, and when Medicaid gets cut, they will blame Obamacare -- even though that is a shameless lie."

As bad as this is, it will get worse if Republicans like Rubio and Ryan get their way.

"At a moment when 10,000 Americans are turning 65 every day, members of the Senate have stolen the retirement health benefits that Americans have earned over a lifetime to provide an unneeded windfall to the top 1 percent," Richard Fiesta, Executive Director of the Alliance for Retired Americans, said. "They seem determined to create a retirement crisis that will take decades to reverse."

Already on Saturday morning on CNN, Republican pundits were trotting out another well-worn lie -- that Social Security was going broke and would not be there for today's youths without drastic measures. (That lie follows their tax cut sales pitch, saying it will bring trickle-down prosperity for all. That line was used in the 1986 federal tax cut, which was followed by decades of wage stagnation).

The Republicans intentionally mislabel Social Security as an entitlement program. In fact, it is an earned benefit program where workers contribute via payroll deductions. It cannot spend money it has not collected under federal law. In the early 2030s, the large size of Baby Boom generation will prompt roughly a 20 percent cut in benefits unless the Congress enacts a revenue measure -- such increasing the wealthy's tax contribution to the program. Now, only the first $120,000 or so of income is taxed for Social Security.

Earlier this week, as the tax bill was on a fast track to passage, an acquaintance told me that he was going to pay about $36,000 a year less in federal taxes under the Senate bill -- based on making roughly $40,000 a month. This very successful lawyer said he didn't need the additional income. He said he didn't want to see Trump have a victory. But it is people like him will not be asked to contribute more to securing social safety nets, from various health programs to retirement income.

Steven Rosenfeld  covers democracy issues for AlterNet. He is a longtime print and broadcast journalist and has reported for National Public Radio, Monitor Radio, Marketplace,  TomPaine.com  and many newspapers. (more...)
Related Topic(s): Health; Long-term Health Care; Medicaid; Medicare; Republican GOP Dirty Tricks; Republican Healthcare; Social Security; Taxes, Add Tags
Add to My Group(s)
Go To Commenting
The views expressed herein are the sole responsibility of the author and do not necessarily reflect those of this website or its editors.