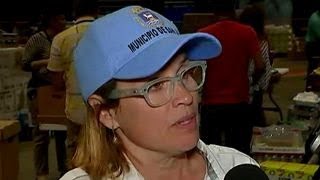 In an interview on MSNBC Thursday night, Cruz explained that "there are various degrees of destructiveness of the botched effort" by the U.S. government to lead the island's recovery. "In San Juan things are getting somewhat better -- we see the light at the end of the tunnel -- but as you move away from the metropolitan areas, still, things are very touch-and-go."

After outlining the ongoing issues that residents are experiencing with accessing electricity, food, and drinkable water, Cruz concluded, "The botched effort has been insensible, it has been man-made, and has been Trump administration-made."

commondreams.org is a progressive publisher
Related Topic(s): Electricity; Hurricane Maria; San Juan Mayor Carmen Yulin Cruz; Trump Cruelty; Trump Hypocrisy; Trump In Puerto Rico; Water, Add Tags
Add to My Group(s)
Go To Commenting
The views expressed herein are the sole responsibility of the author and do not necessarily reflect those of this website or its editors.