No doubt by now you've heard of the deceptive absentee ballot applications mailed to Democrats in Wisconsin by David Koch's Americans for Prosperity, WI, as reported earlier this week by David Catanese at Politico.

As seen below, the mailer instructed recipients to return the application to the "Absentee Ballot Processing Center" by August 11, even though the recall elections for six Republicans is next Tuesday, August 9... 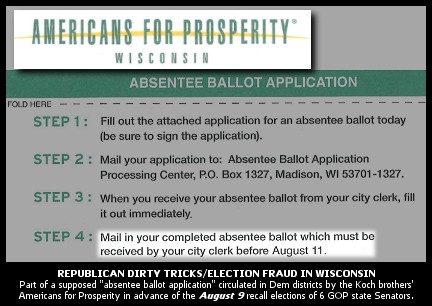 The wrong date on the mailing, however, was not the only problem with it. The address where the application was to be submitted is also a problem, but one that is worse than has been widely reported so far, according to some digging from a Wisconsin activist and election integrity advocate.

Moreover, a comparison to another absentee ballot application mailer from a different, supposedly unrelated, Rightwing group, suggests a coordinated effort by a number of these groups to defraud and disenfranchise voters in Wisconsin in advance of the unprecedented state Senate recall elections to be held next Tuesday...

When the original story of the AFP mailer broke, AFP Wisconsin's director Matt Seaholm tried to explain it away by claiming the incorrect date was little more than a simple "typo" and that the mailing "just went out to our members." He added that he was "sure the liberals will try to make a mountain out of a molehill in an attempt to distract voters' attention from the issues."

In fact, that mailer didn't just go out to AFP's "members," according to Politico's Democratic sources. "These are people who are our 1's [solid Dems] in the voter file who we already knew. They ain't AFP members, that's for damn sure," a source explained.

Worse though, Politico had reported that the mailing went out to Democrats in two districts where elections will be held next week. But today, Greg Sargent at Washington Post reports AFP is now admitting, in a new mailing which actually attempts to raise funds based on the news reports ("left-wing partisans are attempting to use this honest mistake to score political points -- actually accusing us of 'voter suppression'"), that the absentee ballot applications actually went out to everybody, not just to the two districts originally reported.

The new letter contradicts AFP's assertion that they had accidentally sent out the mailer to the wrong people in advance of the August 16 recall elections scheduled for the week after next when two Democrats will be up for recall.

So they're admitting it went out to everybody and they're blaming it on "the printer."

An examination of a nearly identical absentee ballot application mailer sent out by another Rightwing group, suggests that these mailings are very much coordinated and may be using the exact same printer which AFP blamed for their supposed "typo." 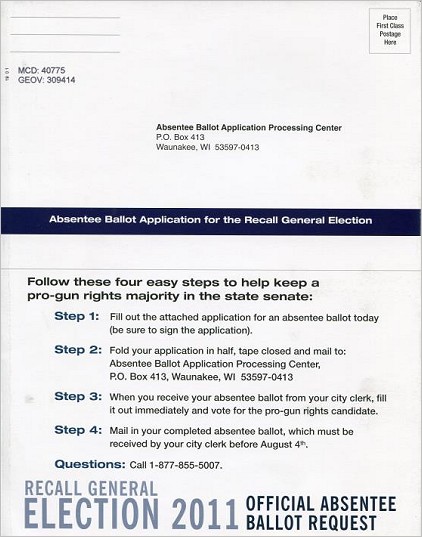 Brad Friedman publishes Bradblog.com
Related Topic(s): Dirty Tricks Political Espionage; Republican; Wisconsin, Add Tags
Add to My Group(s)
Go To Commenting
The views expressed herein are the sole responsibility of the author and do not necessarily reflect those of this website or its editors.