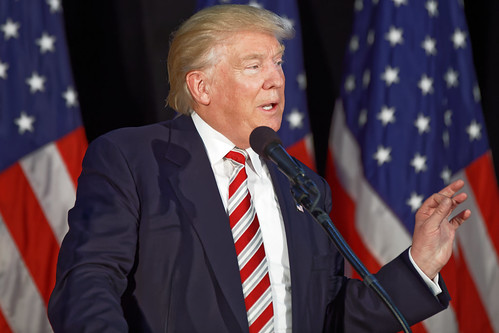 Did Trump commit voter fraud by voting where he is not a resident?
(Image by Michael Vadon)   Details   DMCA

Trump supposedly moved to Florida in order to avoid having his New York State Taxes released under a new law that forces anyone running for office to release their returns (it may not work, since New York State and New York City can still release his old returns). Since Mar-a-Lago can't have him as a resident for more than 3 consecutive weeks under a separate agreement, it's doubtful even Florida will accept him as a resident. And as an attorney in this Forbes article points out, there is "'a substantial and serious potential legal impediment' to the President using Mar-a-Lago as his voting address."

This is a potentially explosive issue, highlighted by a former public official in Quora: if Trump is not allowed to claim Florida residence - he owns no other house there - he and his wife committed voter fraud - by mail, no less. Trump even tried to claim his current White House address when first trying to switch residences to Florida, then used Mar-a-Lago when that was denied by Florida. So, he certainly was warned about dubious residency claims.

Florida: your call. Admit Trump as a resident and open the residency floodgates to every liberal with a long vacation, or deny him residence and let the State Attorney General and Federal Justice Department charge Trump with voter fraud. Choose the former and every liberal vacationer to Disney World could claim Florida residence and elect Joe Biden.