The Department of Justice wants 1.3 million IP addresses of people who visited distruptj20.org. Is reading about protest illegal now? 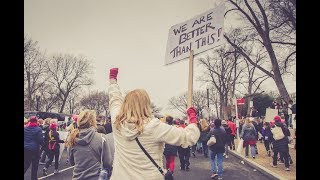 This includes many people who claim they were just in the vicinity of property damage and had nothing to do with it -- and even some journalists. There is also solid public evidence that Facebook received some extraordinary legal orders related to the events as well and are fighting them in court.

"We're planning a series of massive direct actions that will shut down the Inauguration ceremonies and any related celebrations -- the Inaugural parade, the Inaugural balls, you name it. We're also planning to paralyze the city itself, using blockades and marches to stop traffic and even public transit. And hey, because we like fun, we're even going to throw some parties."

Now, it's possible the site's operators were suggesting they were planning on engaging in at least some civil disobedience that the government would consider illegal. But, as EFF's Mark Rumold said on Monday: "This [the website] is pure first amendment advocacy -- the type of advocacy the first amendment was designed to protect and promote."

Related Topic(s): Congress; Constitutional Rights; Public; Us Department Of Justice, Add Tags
Add to My Group(s)
Go To Commenting
The views expressed herein are the sole responsibility of the author and do not necessarily reflect those of this website or its editors.