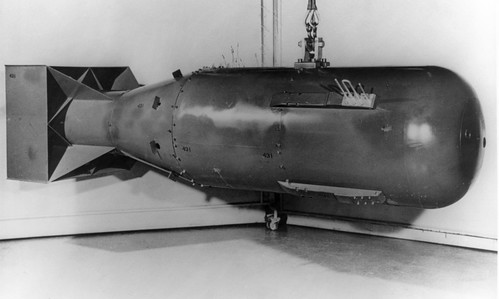 74 years ago by the United States dropped the only two atomic bombs exploded in war on cities of Hiroshima and Nagasaki. Today, recalling those events, remember that the US still refuses to renounce a strategy of first-strike use of its nuclear arsenal. This has me pondering two questions that should raise enormous doubts in our minds as to the motives and morals of this "exceptional" nation of ours.

The first question involves the claim that the Manhattan Project, a hugely expensive crash program to develop the atomic bomb, was about preventing Nazi Germany from getting it first. To be sure, the project began shortly after Albert Einstein and Leo Szilard wrote their famous 1939 letter warning President Roosevelt that the Germans, perhaps with the assistance of the brilliant German Nobel physicist Werner Heisenberg, might be trying to develop an atomic bomb and that the US had better develop it first.

It was, indeed, this scary scenario that convinced many very otherwise humanistic physicists in the US and among European exiles in the US, to join an effort that they knew could produce a weapon terrible beyond imagination.

And certainly there was validity to the argument. The Nazis having such a bomb, and the Allies having nothing to respond to it with, would be too awful to contemplate. And yet the US response given that concern, seems very peculiar.

Every effort was made by Robert Oppenheimer, head of the Manhattan Project, to recruit the best minds in physics and engineering to the cause of developing an American atom bomb, including scientists in the UK and even German scientists like Klaus Fuchs, a young Communist physicist who had fled the Nazis. Talent was so scarce that he even hired talented students out of college, like Ted Hall, a rising senior physics major at Harvard only 18 years of age. But while Russia too had lots of top physicists too (physics has long been a kind of contact sport in Russia, even back under the last Tsar), no thought was given, even though the Soviet Union was America's ally against Germany, to inviting those brilliant scientists -- people like Yuri B. Khariton, Igor Kurchatov and Anatoly Alexandrov -- to join in the crash program to "beat the Germans" to the bomb.

Does this make any sense at all? If there were a real fear that the Germans were likely to obtain the atomic bomb before the US and British, wouldn't any sane person have decided it was critical to seek help from the Russians, whose excellent and ground-breaking work on atomic fission was well known in scientific circles?

Instead, every effort was made to keep both the Germans and the Soviets in the dark about the very existence of the Manhattan Project"

Related Topic(s): Hiroshima; Los Alamos; Nagasaki; Nuclear Attack; Nuclear Bombs; Nuclear Fission; Soviet Union, Add Tags
Add to My Group(s)
Go To Commenting
The views expressed herein are the sole responsibility of the author and do not necessarily reflect those of this website or its editors.