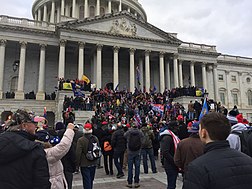 What if Donald Trump actually hoped that his mob would murder Vice President Mike Pence and Speaker of the House Nancy Pelosi?

What if he believed such a crime would create a crisis big enough to let him declare a state of emergency, shut down the government for a transition period through that emergency, and retain his position as President moving into the new year?

Senator Tommy Tuberville told Politico that he told Trump that "they just took" Vice President Pence, but there's no indication on the current public record that Trump understood that "they" meant that Pence had been taken to safety.

"They" could have been taken by Trump to mean the mob had taken Pence, just as easily as it could mean the Capitol Police had saved Pence from the mob.

It's entirely possible Trump thought Tuberville was telling him that the mob had just seized Vice President Pence and was hustling him off to the sturdy gallows they'd built on the Capitol lawn.

In fact, Trump almost immediately tweeted, after talking to Tuberville: "Mike Pence didn't have the courage to do what should have been done to protect our Country and our Constitution, giving States a chance to certify a corrected set of facts, not the fraudulent or inaccurate ones which they were asked to previously certify, USA demands the truth!"

That doesn't sound like Trump's relieved that Pence was just taken to safety.

What if Trump believed that Pence had been "neutralized" at that point in the process of counting the electoral votes, that the count was stopped, and that Pence would soon be dead?

Could this tweet have been his call for his allies in Congress, now that the VP was out of the picture and they were in charge, to throw the count back to the House of Representatives, where in the past he had repeatedly asserted (probably correctly) that Republicans there would give him the presidency per the 12th Amendment like in 1876?

If that's actually what Trump thought was happening, his phone call with Kevin McCarthy makes a lot more sense.

Trump told McCarthy that the mob was more concerned about the outcome of the election then was McCarthy himself, something he probably wouldn't say if he thought that Pence had been taken to safety and the process certifying Joe Biden as president would soon resume.

Instead, if he believed that his mob was actually going to succeed at killing Pence and perhaps Pelosi, both his tweet, his comments to McCarthy and his conversation with Tuberville would come from the same piece of cloth: his belief that Pence would soon be dead, government would be paralyzed, and he could declare himself President For Life.

Trump and his acolytes had, after all, on repeated occasions tweeted -- and liked ads and messages that said Trump would be president for 8, 12, and even 16 or more years.

Trump appointed a new Secretary of Defense immediately after the networks declared he'd lost the election, and that SecDef had issued a memo ordering the National Guard to essentially stand down in the event of violence on January 6th.

Related Topic(s): Mike Pence; Murder; Trump Bigotry; Trump Ego; Trump Untrustworthy, Add Tags
Add to My Group(s)
Go To Commenting
The views expressed herein are the sole responsibility of the author and do not necessarily reflect those of this website or its editors.