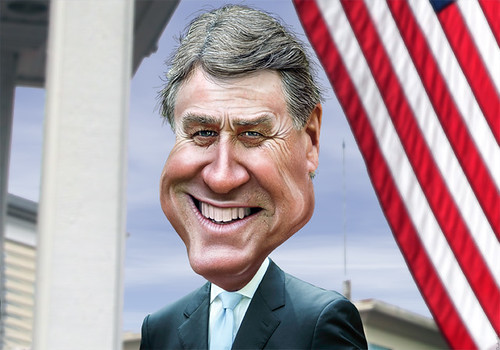 She went on to write "the Georgia freshman, speaking at a conservative Christian event, quoted scripture to say the president's days should be short."

"He added in a joking tone, they need to pray for him in a very specific way: "We should pray for him like Psalms 109:8 says: May his days be short, and another take his office," the senator said, smiling wryly. The crowd chuckled, and he moved on with his address.

"The rest of that passage, which Perdue did not recite, reads, "May his children be fatherless and his wife a widow. May his children be wandering beggars; may they be driven from their ruined homes. The psalm is a pointed, lengthy death wish for one of David's enemies.

"Let the creditor seize all that he has, and let strangers plunder his labor. Let there be none to extend mercy to him, nor let there be any to favor his fatherless children. Let his posterity be cut off, and in the generation following let their name be blotted out," it continues."

Here we have a perfect storm of inferential leaping and dog whistle politics. Ms. Woodruff's headline leaps to a conclusion that her report doesn't support unless one can hear the dog whistle"or simply concede the old saying, "the large print giveth and the fine print taketh away."

I watched the segment of Perdue's talk and don't believe he was praying for the president's death, rather that his days in office should be short. Certainly not a new sentiment from the right.

Being philosophically, politically, intellectually and ethically as far away as one can get from conservative Christians, I had to read the entire psalm to understand what it means. Now I know the dog whistling message when I see a bumper sticker that says "Pray for Obama: Psalm 109:8." Still, I think Ms. Woodruff's headline is misleading even though the sentiment in the psalm directed at President Obama is disgraceful.

I can't know what Ms. Woodruff's intentions were when she wrote the piece. But it's difficult to believe she wasn't trying to spin it to be hyper-critical of these Republicans who call themselves Christians.

As a professional reporter, she must know the vast majority of Internet readers read less than fifty percent of an article. Five percent never scroll down at all after reading the headline. And who knows the comprehension rate of those who do read as much as fifty percent?

I've personally experienced vitriolic commentary from readers who have simply not read my entire piece, not to mention those we misunderstand my point. So I was motivated to write this piece because it is one good example of what ails our political discourse today.

True confession time: I want Ms. Woodruff to be right. That would confirm my bias. It would validate my point of view. In my heart, I believe the infiltration of a perverted Christian revisionism into the Republican party has ruined what the Grand Old Party was! And I agree with Tom Friedman's excellent piece in the New Times this week titled "Dump the GOP for a Grand New Party."

Today, we face several more months of campaign hyperbole, PR spinning, negative ads, and distortion while trying to win the votes. We can't take the high ground and act insulted if we add to this toxic mix.

Demographics are changing, and that's scaring the hell out of the right. Let's promote our vision of a better America with clear channel communications about the new pluriform society that's forming. We on the left don't need to distort the facts to forward our agenda for a more inclusive nation. All we need to do is acknowledge a new reality, the presence of which eludes the right.

Related Topic(s): America; Message; Obama; Obama; Prayers; President; Republican; Senator Republicans GOP; Spin, Add Tags
Add to My Group(s)
Go To Commenting
The views expressed herein are the sole responsibility of the author and do not necessarily reflect those of this website or its editors.