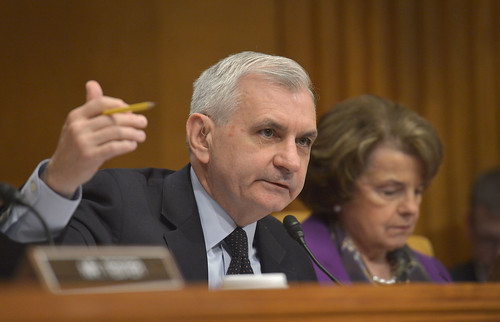 Senator Jack Reed is in a very embarrassing situation in supporting the use and sale of "cluster bombs", which have been criticized by humanitarian groups and 119 nations as being immoral and illegal. They have been aptly described as "Hell from Above". One large bomb is dropped, which then releases tens of hundreds of smaller bomblets. These devastating bomblets are designed to explode above ground, and each bomblet rains down hundreds of pieces of metal shrapnel, which penetrate metal and tears humans flesh and bone apart. About 20% of the bomblets do not explode in air, but fall to the ground and then become active devastating land mines, which kill innocents, especially children. They are so horrific there is a worldwide move to ban them as immoral. Up to this date 119 nations have declared them illegal, but not the US. We are the biggest manufacturer, seller, and user of these immoral weapons. Many are made in RI by Textron. In a recent Congressional vote, 164 Democrats in the House voted them down, but Jack Reed, a Democrat, supports their use and sale. Why? It just might be because he has received $11,000 in contributions from Textron.

Since most humanitarians and nations consider cluster bombs immoral, one might suggest that Jack Reed put politics ahead of morality, or, one might say, he sold his morality for $11,000. But as voters in Rhode Island say, "he is a nice guy", and keep voting him back in. Shame on Jack Reed, but more shame on Rhode Island voters. Do you think your own Congressional delegation has not done the same? Shame on you.

Related Topic(s): Campaign Contributions; Senator Jack Reed, Add Tags
Add to My Group(s)
Go To Commenting
The views expressed herein are the sole responsibility of the author and do not necessarily reflect those of this website or its editors.