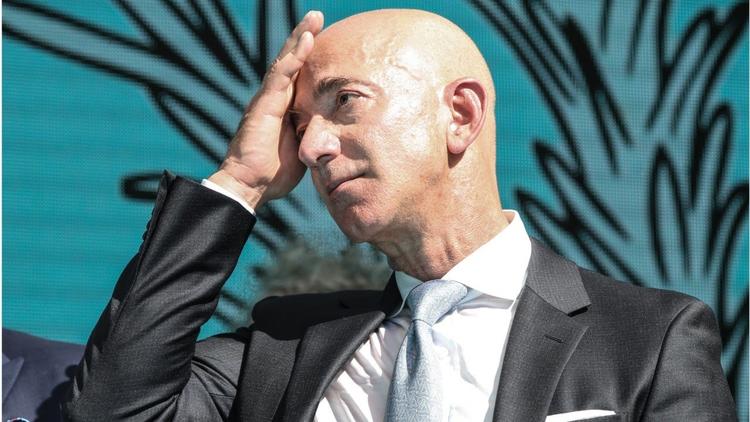 We've long known that Amazon CEO Jeff Bezos's phone was hacked. Large amounts of data were taken off of it, including intimate photographs and evidence of a romantic affair, which then showed up in The National Enquirer. The tabloid's publication of this private material led to Bezos's divorce and the loss of half of his fabulous wealth. A careful forensic investigation of the hack now shows that Bezos's phone was compromised when he opened a message on Whatsapp from the personal cell phone of Saudi crown prince Mohammed Bin Salman. The message contained malicious software that installed itself as soon as Bezos clicked on it to open it. This according to Stephanie Kirchgaessner, reporting for The Guardian.

The revelation that Bin Salman himself played a pivotal role in the attempt to ruin Bezos's life over the Washington Post's reporting on Saudi Arabia and on Donald Trump should send chills down the spine of everyone who has ever chatted with the prince over Whatsapp. Bin Salman made a public relations trip to the US in spring of 2018. He met with Silicon Valley CEOs, Hollywood producers, and New York businessmen. How many phone numbers did he gather up and later use to talk to these movers and shakers over Whatsapp? How much dirt and how many secrets might the prince have by now swept up from the American elite, useful for blackmail and pressure campaigns?

We know that Trump son-in-law and high muck-a-muck without portfolio Jared Kushner also has talked to Bin Salman extensively over Whatsapp. This information raises the question of whether Kushner's phone was similarly compromised by Saudi intelligence, which may be blackmailing Kushner to influence US Middle East policy. Indeed, for all we know, Donald Trump's own phone may have been hacked in this way by Bin Salman. We can only speculate about such matters, since this White House is the least transparent in history. But just for instance, we know that the Saudis have long wanted Iranian general Qasem Soleimani dead. Did they have the kind of dirt on Kushner and Trump that would allow them to blackmail the US into taking Soleimani out? Did they almost involve the US in war with Iran (something that Wikileaks shows the Saudis were trying to do way back in 2006).

This method of hacking phones uses the Pegasus software of the Israeli NSO company, and it is known that NSO sold the program to Saudi Arabia and many other authoritarian Middle Eastern governments. Former National Security Agency analyst Edward Snowden has said that if the Israeli software firm NSO had not sold its "Pegasus" malware to authoritarian governments like Saudi Arabia, dissident Saudi journalist Jamal Khashoggi (who worked for Bezos's Washington Post) would still be alive.

We can now apparently add that if NSO hadn't sold Pegasus to the Saudis, Jeff Bezos would still be married to his first wife, MacKenzie.

I had written last February:

David Pecker's attempt to blackmail Amazon CEO Jeff Bezos would not ordinarily attract my eye. Except for this paragraph:

"And sometimes Mr. Pecker mixes it all together:

"After Mr. Trump became president, he rewarded Mr. Pecker's loyalty with a White House dinner to which the media executive brought a guest with important ties to the royals in Saudi Arabia. At the time, Mr. Pecker was pursuing business there while also hunting for financing for acquisitions..."

We knew that Pecker had brought the French investment banker and Saudi publicist Kacy Grine to the White House.

And Spencer Ackerman had reported on Pecker's strange move to put a pro-Saudi glossy magazine in grocery store check-out lanes in spring of 2018. It is as though he thought American housewives would thrill to the soap opera in Riyadh, where the Dr. Jekyll-and-Mr.-Hyde crown prince Mohammed Bin Salman had in summer of 2017 sidelined his rival Mohammed Bin Nayef, dethroning him as crown prince and greedily taking his place, before he kidnapped many in the Saudi elite to shake them down for $100 bn while imprisoning them in the Ritz Carlton. Days of Our Lives had nothing on the Saudis.

In short, there is every reason to believe that Pecker is entangled with the Saudi royal court of King Salman, perhaps, as Bezos alleges, in search of investment opportunities.

One question I have long had is whether investigators looking at the Russian element in the election of Trump are not unduly downplaying a United Arab Emirates and Saudi angle. That is, did those two oil monarchies help put Trump in power in the first place, and is there a prehistory to their entanglements with his circle?

But what Bezos goes on to allege is that he had hired a private investigator to find out how Pecker got hold of his texts and exchanges of smartphone photographs with his lover, Lauren Sanchez.

And the investigator, Gavin de Becker, looked into whether Pecker's National Inquirer is influence-peddling for Saudi Arabia for some sort of quid pro quo.

Related Topic(s): Hack Attack; Jared Kushner; Jeff Bezos; Murder; Photographs; Prince Mohammed Bin Salman; Prince Bandar Bin Sultan; Soleimani; Trump, Add Tags
Add to My Group(s)
Go To Commenting
The views expressed herein are the sole responsibility of the author and do not necessarily reflect those of this website or its editors.