The Superintendent of the Los Angeles Unified School District (LAUSD) is hired by the School Board and is expected to stay out of district politics. It was, therefore, very surprising that tweets were circulating from the current Superintendent, Austin Beutner, where he had re-tweeted messages of support for the campaigns of Marilyn Koziatek and Tanya Ortiz Franklin. The original messages were created by Speak Up, a group that was initially created to support the election of board member Nick Melvoin in 2017. Speak Up pretends to be a grassroots organization that represents district parents but is actually financed by the Walton Foundation to promote the spread of charter schools in Los Angeles and to fight any attempt to hold these publicly funded private schools accountable. 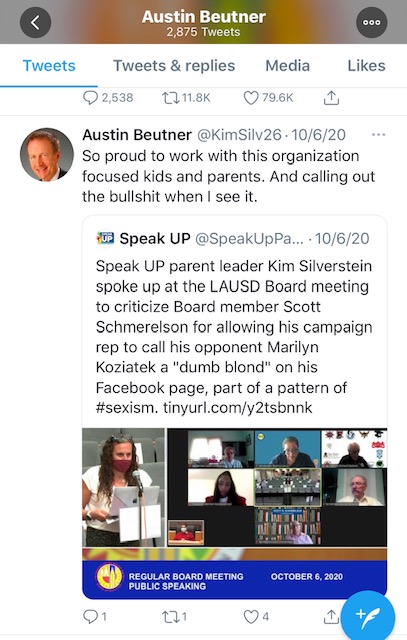 (Image by Kim Silverstein)   Details   DMCA
Beutner did not actually send these messages. Nor did he send a tweet supporting Speak Up as "focused [SIC] kids and parents. And calling out the bullshit when I see it." Instead, these tweets were sent out by Kim Silverstein, whom Melvoin's organization describes as a "Speak Up parent leader." Violating Twitter policy and possibly the law, Silverstein registered an account in the name of the Superintendent. The profile picture used for this account was Beutner's.

Sometime after the election, the name on the @KimSilv26 Twitter account was changed to "kim silverstein (but I wish I was austin beutner)." Another Twitter account, @kimborambo, also appears to be Kim Silverstein's as it links to a blog that then links to the same photography company that is mentioned in the Twitter account formerly attributed to Beutner.

This was not Silverstein's only act of deception during the campaign. In a blog dated October 5, 2020, that is posted on speakupparents.org, Silverstein stated that "a campaign representative for Schmerelson" had called Marilyn Koziatek a "dumb blond" in a Facebook post. She claimed that this was part of "a pattern of sexism from Board Member Schmerelson." (Ironically, Silverstein tweeted under Beutner's name that she was "turned on" by Katie Porter.)

While the person who made the post on Facebook, Linda Perez, is a supporter of the incumbent and did volunteer for his campaign, she served in no official capacity. She did not have the title of "campaign representative" or hold any type of leadership role.

Since he was the person who Speak Up was created to support, board member Nick Melvoin needs to take responsibility for the organization's actions. Being affiliated with a group that publicly impersonates the Superintendent and lies about a private citizen's affiliations are unbecoming of a public official who is supposed to model ethical behavior for our children. Melvoin not only needs to repudiate these actions but disassociate himself from Speak Up.

(Image by Speak UP)   Details   DMCA
The media also needs to stop treating Speak Up as a legitimate grassroots organization. An article in the Los Angeles Times stated that "evidence mounts that students are faring poorly in online learning" citing "a survey of 300 parents." It was not until six paragraphs later that the data was attributed to Speak Up, which was identified as an "advocacy group," and that the article pointed out that the poll was conducted online and was not scientific.

Coverage by The LAist and KPCC was even worse as these outlets did not even bother to divulge to their readers that the poll was not conducted scientifically. The concerns expressed by the parents quoted in these articles are legitimate, but reporting complaints as percentages in a fake poll was deceptive. To repeat these numbers, especially without context, is an act of journalistic malpractice. 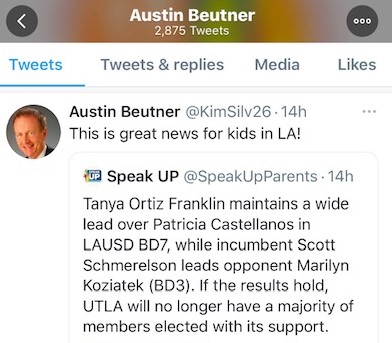 (Image by Kim Silverstein)   Details   DMCA
Absent from any of the coverage was the fact that Speak Up receives a large chunk of funding from the Walton Family Foundation. This is the same foundation that has provided millions of dollars to the Citizens of the World Charter Schools. This nationwide charter chain has taken up residence at Shirley Elementary School in the San Fernando Valley, displacing space that was formerly used by the public school to provide family and special-education services. Jim Walton was also a major funder of the deceptive ad campaign in the LAUSD School Board race that at times was anti-Semitic.

With a record that includes failing schools, excluding children with special-education needs and embezzlement, the charter-school movement has not lived up to its promises. Unable to defend themselves from these documented failures, the charter-school industry attacks anyone who tries to hold them accountable with deceptive tactics such as the ones used by Melvoin's group. It is time for supporters of public education to "speak up" against this unethical behavior and protect our students.

STAY IN THE KNOW
If you've enjoyed this, sign up for our daily or weekly newsletter to get lots of great progressive content.
Series: "Melvoin Watch"