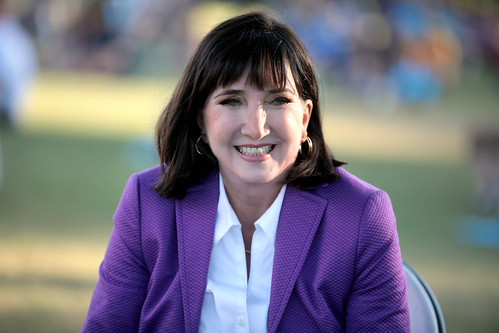 Most pundits agree, Libertarian candidates are more likely to take votes from Republicans than from Democrats, and this ought to be particularly true this year, when Biden is running to the left of his former boss, president Obama, if not as far left as Bernie Sanders.

Further proof of Jorgensen's appeal to the right, comes from her stronger results in states that voted for Trump:

Jorgensen performed the best in rural, Western states. She secured 2.7% of the vote in Alaska and North Dakota and 2.6% of the vote in South Dakota, according to the AP.

These are not enough votes to change the results in such deep red states, but they demonstrate her stronger appeal to the those voters.

She summerizes up her Libertarian platform thusly:

Jorgensen has been campaigning across the country since the summer and said many supporters have come from across party lines - mainly, "recovering Democrats" who want troops called home from overseas missions and Republicans upset that Trump failed to cut the national budget deficit as he promised during his 2016 campaign, she said.

In the key Biden victory states of Georgia and Arizona, her >1% showing exceeds the gap between Biden and Trump. We can assume she took more votes from Trump, though how many voters would not have voted at all if she had not run, we may never know, since ranked choice voting is only available in Maine, where she came in with 1.74% of the votes, with a few thousand more votes yet to be counted in some republican-leaning counties, meaning her final total might get close to 2%. It's intriguing that in the only state with ranked choice voting, which Biden won easily, Jorgensen should do as well as more deeply red states. This may indicate she would have done even better, had other states had ranked choice voting. Howie Hawkins, the Green Party candidate, who wasn't even on the ballot in most states, only received 1.01% of the vote, with 100% of the blue counties already tabulated, though this too, shows that ranked choice voting likely increased the total vote for third party candidates like those in the Green Party.

In Pennsylvania, where thousands of votes have not yet been counted, mostly in smaller, rural, counties where Trump does well, the 0.94% gap between Biden and Trump may narrow significantly, though not, the major media tell us, enough to tip the state to Biden (whether Trump's campaign will attempt an 11th hour challenge or ask for a recount, is another matter). However, it is already less than the 1.15% share of the vote Jorgensen received... so far. If more votes remain in the red counties, this percentage may increase slightly as well.

Pennsylvania, with its 20 electoral votes, put Biden over the top. Without Pennsylvania, Biden would have had to rely on Georgia and Arizona, where, as we've seen, Jorgensen's share of votes was enough to cost Trump the election, again with the unknown variable being how many actual voters would have switched to Trump.

Wisconsin too, is within the Jorgensen margin, and other third party candidates complicate matters even further:

But Trump and his supporters can take heed, or become angry, over one fact that Biden alone did not defeat the president. He had help from a political rival whose views the voters find more akin to his main opponent, president Trump, than to his own. The Democrats, on the other hand, should take a moment from rejoicing in the streets, to reflect on how close they came to losing, if not for a candidate who agrees with neither their candidate, nor the incumbent, but who more likely proved decisive in their favor in at least four must-win key battleground states.

Both parties need to understand that the division between Americans is not a two-way split, it is three-way, or even more.

Related Topic(s): Democrats; Election; President; Supporters; Trump, Add Tags
Add to My Group(s)
Go To Commenting
The views expressed herein are the sole responsibility of the author and do not necessarily reflect those of this website or its editors.