Team Trump is doing everything it can to "ignore" climate science. 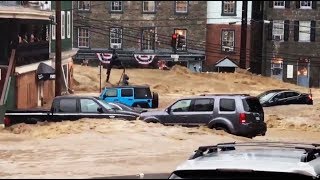 On Memorial Day 2018, members of the Maryland National Guard and some residents of Ellicott City, Md., a historic mill town just west of Baltimore, were way too busy to honor fallen soldiers from America's past wars. They were occupied instead with searching through the muck and debris from an almost Biblical flood the day before, praying with the increasingly dim hopes that a 39-year-old Air Force veteran and Guard member named Eddison Hermond might be found alive.

Hermond went missing after a small act of kindness in the midst of Sunday's natural disaster. As the floodwaters caused by 6-to-10 inches of rapid rain cascaded like whitewater rapids through Ellicott City's timeworn main streets, the National Guardsman told a desperate resident he would help find her lost cat, who went missing behind a restaurant. Instead, witnesses said Hermond was swept up and then under by the rapid floodwaters and disappeared.

Searchers are fearful Hermond will become the third person in Ellicott City to die from floods in less than two years. In July 2016, a massive burst of rain that meteorologists blamed on unusually moist air in the depths of a heat wave caused a flood and two fatalities. At that time, officials said the flood has been Ellicott City's once-in-a-1,000-years storm. Twenty-two months later, Ellicott City experienced its second once-in-1,000-years storm.

After the 2016 disaster, a top Maryland lawmaker -- state Sen. James Rosapepe, chair of a key environmental subcommittee -- asked, "Did climate change kill two people in Ellicott City?" -- pointing to the mounting evidence that a hotter planet and a wetter atmosphere is making weather events more extreme and thus more deadly more often. He said government officials are making a mistake by not seeing flash floods from these 1,000-year storms that now happen every year or two as a part of the global-warming puzzle. Rosapepe argued in 2016 that "climate change is about more than polar bears and the rising sea level in the Chesapeake Bay."

Related Topic(s): Climate Change; Climate Change Deniers; Donald Trump Against Climate Change; Fracking; Solar; Weather, Add Tags
Add to My Group(s)
Go To Commenting
The views expressed herein are the sole responsibility of the author and do not necessarily reflect those of this website or its editors.