Weeks after the feds raided Butina's apartment, the gun group's president made a hasty exit. 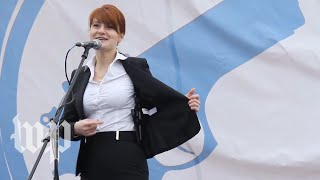 On May 7, the National Rifle Association released a curious press release declaring that Oliver North, the key player in the Iran-contra scandal and an NRA board member, was "poised to become" the group's president. Earlier that day, Peter Brownell, then finishing his first term as NRA president, had announced that he would not seek a second annual term in order to devote more time to his family business, a firearms retail company.

This changing of the guard -- and how it happened -- was odd. For 15 years, the NRA leadership had followed a specific pattern: an officer was elected by the board to serve two consecutive annual terms as second vice president, then two as first vice president, and, finally, two as president. But the Brownell-to-North transition broke this orderly process. North at the time was serving in neither vice president position. And his ascension was a surprise -- even to North. The day of the move, North told NRATV, "I didn't expect this to be happening...This was very sudden." (North also remarked, "A coup is being worked against the president of the United States and every conservative organization on the planet.")

This development puzzled NRA watchers. North had not been in the line of succession. He was not prepared for the position and said he would need weeks before he could assume the post. Brownell was the first NRA president in a decade and a half not to seek a second term, and the first vice president, Richard Childress, was passed over. Childress claimed that because of his own commitments he could not even serve as interim president. That job went to the second vice president, Carolyn Meadows. The NRA had been known as an outfit with a strict hierarchy. But now all that was being thrown aside in what North called an "unexpected" and "sudden" action.

Go to Mother Jones for the rest of this article.

David Corn is  Mother Jones ' Washington bureau chief. For more of his stories,  click here . He's also  on  Twitter  and  Facebook .  RSS  |  TWITTER  David is (more...)
Related Topic(s): Firearms; Maria Butina; NRA; Oliver North, Add Tags
Add to My Group(s)
Go To Commenting
The views expressed herein are the sole responsibility of the author and do not necessarily reflect those of this website or its editors.