Joan Brunwasser: Welcome to OpEdNews, Tracey. We're here to discuss the latest in what seems to be a never-ending stream of deaths of people of color at the hands of the police. George Floyd died on Memorial Day. There are readers who might have missed this story. Can you give us the highlights before we continue?

Tracey Brame: Of course. On May 25, a deli worker in Minneapolis called 911 after he suspected that Mr. Floyd and his friends had passed a counterfeit $20 bill. Officers arrived on the scene and arrested Mr. Floyd. Officer Derek Chauvin, among the last officers to arrive at the scene, intervened as fellow officers trying to get Mr. Floyd into a squad car. Officer Chauvin pulled Mr. Floyd from the car and pinned him to the ground by placing his knee on Mr. Floyd's neck. Officer Chauvin kept his knee on Mr. Floyd's neck for over seven minutes, despite Mr. Floyd's desperate cries for help and bystanders urging him to stop.

JB: Protests against Mr. Floyd's murder have erupted across the country and Minneapolis has tried to move quickly with some indictments. Their initial indictment was upgraded yesterday. Can you talk about the indictments?

TB: One of the striking things about the incident was the swift firing of the officers involved and arrest of Derek Chauvin. It seems as though the whole country, including many law enforcement officials, were deeply disturbed by the killing of George Floyd and immediate steps were taken to begin the process of holding those responsible accountable. Officer Derek Chauvin was initially charged with third degree murder, however, that charge was recently upgraded to a more serious charge of second degree murder. Three other officers - Alexander Kueng, Thomas Lane, and Tou Thao - were charged with aiding and abetting second degree murder for their faiure to intervene.

The new charges reflected the severity of the case and the recognition that Mr. Floyd's death was the result of a callous and unnecessary assault.

JB: Let's talk a bit about Minneapolis itself. I learned recently that it has the largest racial economic disparity in the country. That surprised me. Beyond that, there has also been an issue regarding police training and how it's been used to militarize, a far cry from the original term "peace officer". Your thoughts?

TB: It is interesting that you say that. My husband was surprised also. He did not think of Minnesota as a hotspot for racial disparity. While it seems surprising, this is not the first time that Minnesota's paradox has come to light (great overall quality of life contrasted by struggling communities of color. When Philando Castille had a fatal encounter with a police officer in St. Anthony in 2016, racial and economic disparities were part of the conversation. We see the same dynamics here in Grand Rapids, Michigan, an up and coming mid-sized city that was named the second worst place for African-Americans to live in 2016. These disparities play out across sectors such as education, health and employment and help to explain the overrepresentation of the African-American community in the criminal justice system.

The dichotomy of police officers as servants and protectors versus "warriors" has been stark in Minnesota. After the death of Philando Castille, Minneapolis banned the warrior-style police training that had been gaining popularity in some circles. The training prioritizes officer safety and conditions trainees to view all encounters as inherently dangerous. Police offices, like soldiers, should be trained to kill with less hesitation, according to the fear-based philosophy. Though the city of Minneapolis banned such training, the head of the police unit continued to tout it, and made it available to interested officers.

There is no doubt that police officers have dangerous jobs, but this view of officers as being at war with the communities that they serve turns every citizen into a potential enemy combatant and every encounter into an acrimonious one. The way that you view a person heavily impacts how you approach and deal with them.

In the past week, we have seen leaders in various cities talk about defunding and revamping police departments and concentrating more resources to social programs and community building. 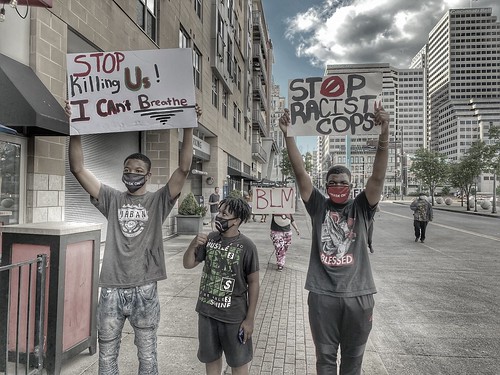 JB: So much to talk about. Regarding the warrior training that Minneapolis distanced itself from, I read that their police union paid for their members to have the training anyway. Then, I read: Inside Trump's DC military operation: 2100 soldiers in riot gear armed with bayonets for operation 'Divine Law and Order' Bayonets?! If anyone out there has a benign explanation for that one, I'd really like to hear it.

While feeling estranged from the police has been an old and sad refrain from those living in minority communities, we who live outside those communities are seeing that chasm reflected in city after city, through the televised excessive use of force on peaceful individuals exercising their constitutional rights. Thank goodness for cellphone cameras! How has social media helped or hindered recent events? How has it affected our understanding of what's happening?

TB: Social media, of course, can be a double edged sword. It can be used to spread conspiracy theories, and as a platform to hide extreme and dangerous views in a cloak of anonymity. However, it can also be powerful. During the Civil Rights Movement of the 1960s, television coverage of the protests and violent response from government officials and police helped capture the nation's attention regarding the plight of African Americans. The mother of Emmett Till, a young teenager brutally killed because he allegedly whistled at a white woman, made the difficult decision to keep his casket open at his funeral so that the world could see his mangled body. That image played a vital role in the momentum of the movement.