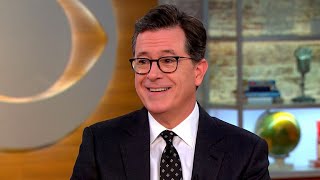 The first year of Donald Trump's presidency has seen innumerable crises develop domestically and throughout the world. There have been several shootings on school campuses. Our elections have been tampered with by Russia, and they're still doing it. Trump is threatening nuclear war with North Korea. And his proposal to impose tariffs (mostly on our allies) sent the stock market into a tailspin.

So what does Devin Nunes, the Republican chairman of the House Select Intelligence Committee, consider to be one of the most serious hazards facing America? Well, of course, it's late night television comedy, and specifically Stephen Colbert. Nunes was interviewed on Fox News by their resident Financial Distortion Anchor, Neil Cavuto (video below). The segment had nothing to do with the economy, but it did get to the bottom of the frightening assault on America by radical satirists. It began with this probing exchange:

Cavuto: "You mention that the media doesn't present a fair case of [Trump/Russia]. Maybe the indication of that is that you've recently become the butt of late night comic jokes. Particularly Stephen Colbert was up on Capitol Hill. I think making you the butt of some jokes. What did you think of that? Did Colbert make any effort to talk to you?"

Exactly. Stephen Colbert absolutely is "the danger" that America faces. And kudos to Cavuto for bringing up this looming peril. Where else but on Fox News could this travesty be exposed? Nunes points out that the reason the nation is undergoing such unprecedented turmoil is that leftists have seized control of the most powerful institutions in the country -- universities and Hollywood -- and are using them to enslave the minds of decent citizens. However, he doesn't explain why these scurrilous lefties allowed Republicans to control the Congress, the Supreme Court, and the White House.

Also unexplained is how the special counsel, Robert Mueller, managed to get (so far) 19 indictments and five guilty pleas connected to his investigation of Trump's unsavory connections to Russia. But rest assured, somehow it's the fault of universities, Hollywood, and Colbert. And Nunes isn't taking it lying down. He doesn't intend to be the butt of anyone's joke, no matter how much he deserves it. In fact, he likes it:

Nunes: "So I hope they continue to do it. Because on the one hand you'll see the left and the media running out there saying 'OMG, this is the end of the world. The Russians attacked our democracy. And we have evidence of collusion between the Trump campaign and the Russians.' However, they can't show it. They have no proof [...] they resort to going to their friends in Hollywood to make fun of people and attack people who are trying to get to the truth. I enjoy the attacks. If they want to continue to attack me, that's fine."

Well, we certainly wouldn't want to disappoint him, would we? Although it's puzzling that he says he enjoys it while simultaneously complaining that it's an unfair attack and a danger to the country. Is he an unpatriotic masochist?

Nunes' remarks were rife with allegations as to the identity of the real colluders -- naturally, Hillary Clinton and the Democrats. And when Cavuto asked him about allegations that he was "doing the President's bidding," he curiously replied "I don't know." Then quickly stammering to add "I mean, we don't get any orders from the White House." Which makes perfect sense. They are probably coming from Mar-A-Lago, where the President spends most of his time.

Nunes went on to praise his committee's work and insisted that he "follows the facts where they lead." So long as they lead to Clinton and the Democrats. He refused to allow his Democratic committee colleagues to call witnesses. And he wouldn't hold White House witnesses accountable when they refused to answer questions. Nunes falsely claimed that 'no one would know ... that Fusion GPS was paid by the Hillary Clinton campaign and the Democratic Party' but for his efforts. In fact, it was reported by the (fake?) media long before he ever got around to it.

Once again, Fox News uncovers the atrocities in Washington that are neglected by the "mainstream" media (which, for some reason doesn't include Fox News). And heroes like Devin Nunes are permitted time to inform the American people about what is really going on in this gawd-awful country. With journalism like this we will hopefully soon be rid of fake reporters like Colbert who are working tirelessly to destroy America.

Here is the Fox News segment with Cavuto and Nunes:

And here is video of Colbert's trip to Washington, D.C.:

Related Topic(s): Democrats; Devin Nunes; Hollywood; Investigation; Leftist; Mar-a-lago; Stephen Colbert, Add Tags
Add to My Group(s)
Go To Commenting
The views expressed herein are the sole responsibility of the author and do not necessarily reflect those of this website or its editors.