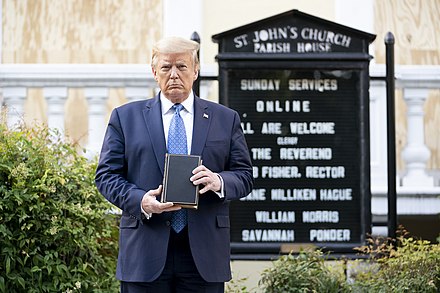 Part one of this article dealt with three aspects of Donald Trump's sociopathy that were identified by clinical psychologist and niece Mary Trump -- chronic criminality, arrogance, and disregard for the rights of others. Part one attempted to substantiate them with concrete examples of Trump's aberrant behavior.

But Ms. Trump made two additional observations about Donald's mental state that deserve consideration and substantiation. First, she claims that her uncle "may have a long undiagnosed learning disability that for decades has interfered with his ability to process information."

That learning disability was on display before the entire world on April 24, 2020, when Trump took to the podium during a nationally televised Coronavirus Task Force briefing and proceeded to speculate nonsensically about potential scientific research into injecting strong light or certain disinfectants into the body in order to kill the virus. That's right, inject disinfectants!

One needs to read Trump's nonsensical speculations to believe that even he was stupid enough to utter them: Addressing Task Force member, Dr. Deborah Birx, Trump said: "So, supposing we hit the body with a tremendous - whether it's ultraviolet or just very powerful light - and I think you said that that hasn't been checked, but you're going to test it. And then I said, supposing you brought the light inside the body, which you can do either through the skin or in some other way, and I think you said you're going to test that too. Sounds interesting."

But, before Americans across the country could begin cringing or guffawing in amazement, Trump turned to disinfectant: "And then I see the disinfectant, where it knocks it out in a minute."

"And is there a way we can do something like that," he went on, as Birx stiffened back into her chair, "by injection inside or almost a cleaning." Because you see it gets in the lungs and it does a tremendous number on the lungs. So it would be interesting to check that. So, that, you're going to have to use medical doctors. But it sounds - it sounds interesting to me." (Dareh Gregorian, "Dr. Birx goes viral for reaction to Trump's 'injection' comments, NBC News, April 24, 2020).

But, it was Dr. Birx's explanation of Trump's bizarre speculation that appeared to confirm Mary Trump's suspicions about her uncle's "long undiagnosed learning disability that for decades has interfered with his ability to process information."

"Birx said Trump was given new information shortly before the briefing, and he likes to 'talk that through out loud and really have that dialogue.' 'He was still digesting' the information, Birx said" (Ibid.). She could not possibly say about her boss what everyone knew: "Any normal person, possessing merely a normal capability to process information, would have spent less than one second "digesting" the same information about light and disinfectants on surfaces before dismissing the possibility of injecting them as totally ludicrous."

Trump's specific learning disability contributes to a much larger problem, his refusal to process new information, especially when its presentation threatens to publicly humiliate him by exposing his ignorance. As Mary Trump concludes: "Donald today is much as he was at three years old: incapable of growing, learning, or evolving, unable to regulate his emotions, moderate his responses, or take in and synthesize information."

Recall that Trump could not rage against his public humiliation by President Obama, nor could he rage when the delegates to the United Nations laughed at his claim that his administration "had accomplished more than almost any in U.S. history." Similarly, he could not rage publicly about his humiliating Coronavirus Task Force performance. He was compelled to accept public humiliation all three times. Nevertheless, Trump frequently flies into a rage during closed briefings, whenever somebody says something that threatens to expose his prodigious ignorance, which immediately triggers his fear of humiliation.

According to Mary Trump, Donald learned a painful lesson about humiliation when brother Freddy, age fourteen, dumped a bowl of mashed potatoes on seven-year-old Donald's head. "It wounded Donald's pride so deeply that he'd still be bothered by it when [sister] Maryann brought it up in her toast at the White House birthday dinner in 2017." From the age of seven, then, Donald "would never allow himself to feel that feeling again. From then on, he would wield the weapon, never be at the sharp end of it."

For example, whenever Chief of Staff John Kelly suggested a briefing of Trump on virtually any topic, Trump, "immediately threatened by the notion that his knowledge wasn't sufficient if he needed experts," would assert: "I don't want to talk to anyone. I know more than they do. I know better than anybody else." (Philip Drucker and Carol Leonnig, A Very Stable Genius: Donald J. Trump's Testing of America, (p. 165)

Such obdurate defensiveness explains why Trump's wide-ranging ignorance remains extremely formidable. How formidable? Try to imagine Chief of Staff John Kelly finding himself compelled to brief Trump about something as simple as the meaning of Pearl Harbor. Yet, after Trump asked: "Hey John, what's this tour all about? What's this a tour of?" Kelly was required to do precisely that (Ibid, p 169).

Walter C. Uhler is an independent scholar and freelance writer whose work has been published in numerous publications, including The Nation, the Bulletin of the Atomic Scientists, the Journal of Military History, the Moscow Times and the San (more...)
Related Topic(s): Trump Afghanistan Peace Deal; Trump Against Climate Change; Trump Against Democracy; Trump And Iran; Trump And Mail-in Ballots; Trump And Nato; Trump And Putin; Trump Bible; Trump Draft Dodger; Trump July Fourth Speech; (more...) Trump Liar; Trump Mental Health; Trump Mental State; Trump Moron; Trump Nightmare, Add Tags  (less...)
Add to My Group(s)
Go To Commenting
The views expressed herein are the sole responsibility of the author and do not necessarily reflect those of this website or its editors.