"Don't waste any more time or energy on the presidential election than it takes to get to your polling station and pull a lever for a third-party candidate---just enough to register your obstruction and defiance--and then get back out onto the street. That is where the question of real power is being decided." Chris Hedges, May 2012

Runway capitalism is moving unrelentingly towards sociopolitical-environmental collapse--cheered on by a two-headed single party machine known as US Congress. Activists, who see the coming disasters as catastrophic, are seeking revolutionary change through non-cooperation, and occupy disruptions. Yet, many are the still delusional hopefuls desperately fumbling with traditional responses; including "Kum ba yah" marches, and the futile support for progressive left-leaning candidates seeking positions of influence inside the Washington beltway.

Do we understand that habeas corpus is no longer a legal protection in the US or that the US president can torture and kill American citizens, let along anyone in the world? How can we ignore the inconvenient truths of warrentless wire taps and electronic monitoring for everyone? Why do we tolerate that US-NATO forces killing people in over one hundred countries in the world using special service operatives, private assassins and drones--a million civilians deaths in Iraq alone? How can we be so blind as not to see our corporate media is a propaganda fog machine for the one percent?  These questions, reflecting the reality of America today, are so far from the values of our traditions that accepting any aspect of authority from Washington DC is a sacrilege to our honor. We are in desperate times.

In Congress, wealth begets membership, and wealth is the reward for correct action. The members in the House and Senate have a collective net worth of $2.04 billion, up from $1.65 billion, in 2008.  While at the same time, Americans' household net worth has continued to declined and the number of people living in poverty has risen for the fifth year in a row.

The American Congress is in reality an artificial organization serving as cheerleader to the transnational corporate class of the world. Congress offers its members little more than a transitional path into the good life of corporate affluence as long as the members remain loyal to party discipline. Our legitimate electoral process has been completely usurped by the Supreme Court ruling that a corporation's free speech rights allow unlimited campaign spending, and congressional lobbying knows no bounds. Any candidate willing to serve in the Democrat or Republican parties in the US congress today, even as a gadfly of resistance, is stepping beyond the pale of constitutional government.

Even if a Progressive Democrat of America--Moves On into the congressional circle, the magnitude of compromise demanded makes effective action impossible other than occasional symbolic votes of resistance. Those stepping out of party lines will invariably result in orchestrated opposition during the next selection cycle--Just ask Cynthia McKinney.

Reform is not an option. The only action possible is a complete and total return to the social justice values of our US Constitution and the Bill of rights. We cannot allow extrajudicial killings, privacy invasions into our homes, and police state interceptions in the commons. We cannot allow global capitalism to continue to kill and impoverish billions of people and destroy the planet 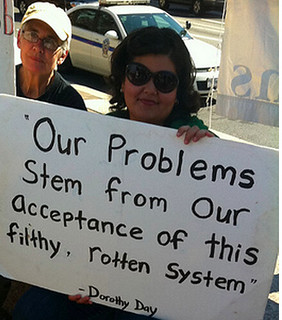 Protecting and even rewriting our Constitution and our Bill of Rights will require revolutionary acts. We must retool our elections and eliminate/ignore the dark clouds of corporate media. A mass movement at this level requires grass roots action by a core of at least ten percent of our population. Getting one out of ten people actively involved is not at all impossible; this is where our traditional values meet human rights. We are a people of hope that only need to overcome our fears and find the voice of our values by using radical democracy for human betterment for all.

The right to vote is a long held value. We am often asked, "Why waste your vote on an independent third party candidate, they will never has a chance to win." Can voting for a candidate who reflects your own political values and beliefs be a wasted vote? It seems that voting for your true beliefs is a self-actualizing act, and compromising one's values to pick the lesser of two evils is self-alienating. Therefore, we urge all to continue to vote, but find candidates outside of the two party oligopoly. Maybe someday, self-actualized voting will be fashionable.

Peter Phillips is a professor of political sociology and social movements at Sonoma State University. He is the president of Media Freedom Foundation/Project Censored, and co-host with Mickey Huff of the weekly Project Censored Show on KPFA.

Peter Phillips is a Professor Sociology at Sonoma State University and recent past Director of Project Censored. He teaches classes in Media Censorship, Investigative Sociology, Sociology of Power, Political Sociology, and Sociology of Media. He has (more...)
Related Topic(s): Electoral Change; Revolution, Add Tags
Add to My Group(s)
Go To Commenting
The views expressed herein are the sole responsibility of the author and do not necessarily reflect those of this website or its editors.

The Financial Core of the Transnational Capitalist Class

Cuba Sets a Global Example for the Achievements of Socialism