From Voices In Our Heads 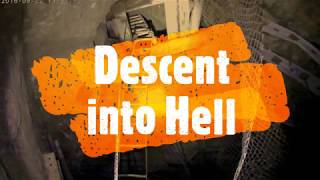 The last article I read last night before I turned the computer off was from splinternews.com:

"The Trump Administration Is Going After Naturalized Citizens Now

"Donald Trump's administration is not only busy tearing children away from their parents at the border -- they're also going to start focusing on fresh new ways to oppress naturalized citizens in America. On Tuesday, the Associated Press reported that U.S. Citizenship and Immigration Services, the government agency that oversees immigration applications, is now creating a new office staffed by several dozen employees. It will be dedicated to looking for people who may have cheated to obtain their citizenship and stripping them of it. Think of it as terrorization by paperwork."

I turned the computer off and went through the house checking to see that all the lights had been turned off and the bird's cage had been covered. Then I went into our bedroom. My wife had not yet gone to sleep. I told her the only person in her family that was a "Native Born" American citizen was her youngest brother. Everyone else -- her parents, the rest of her siblings and herself -- were "naturalized" citizens.

I told her what I had just read, and her response was that they probably weren't looking for Filipinos who had come into the country over 45 years ago. They're looking at people who came from Mexico, Central and South America, and the Middle East.

Because I look at things through a slightly different lens, I said yeah ... for now. She turned off the light and I turned on my Kindle. It's a backlit model so I can read without disturbing her.

About a half hour later I decided that was enough reading for the night and turned the Kindle off. A few minutes later I turned it back on and in its faint light wrote one word on the notepad I keep on my nightstand: Descent.

Now it's morning. My wife and son are off to work and school and I can follow where that one word leads... Descent.

The short conversation my wife and I had the previous night must have taken place countless times throughout Nazi-controlled Europe.

To paraphrase Arlo Guthrie, I can tell Nazi Ghost stories all day long. I'm not proud ... or tired. But I'm beginning to realize these aren't Nazi Ghost Stories anymore. One by one these haunted Halloween tales turn up in the New York Times or on the Nightly News.

There are monsters in America. They are tearing families apart. Regardless of how much terror and anguish they cause by ripping children away from their parents, the monsters continue to follow their f*cking orders and do their f*cking jobs. They are building a f*ucking concentration camp in Texas for children. And now the monsters are turning their baleful gaze toward "naturalized" American citizens.

Eighty years ago, the questions monsters asked were to determine how much Jewish blood flowed in the veins of the people they ruled. One drop made someone suspect. And a suspect could be a threat. And threats to the Homeland had to be controlled or eliminated. The safety and security of the Homeland depended on it.

Sooner than later, our monsters will broaden their focus and begin to question how American some people are regardless of their "native born" status. Fucko the Clown said of football players who kneel on the field in protest, "You have to stand proudly for the national anthem or you shouldn't be playing, you shouldn't be there. Maybe you shouldn't be in the country."

Some 45 years ago I became aware of the fact that the government of The United States was trying to kill me. I wasn't paranoid or anything. I mean I knew the government wasn't out to kill me personally. They just wanted to kill as many Vietnamese (more...)
Related Topic(s): Children; Families; Fascism; Immigration; Monsters; Suffering, Add Tags
Add to My Group(s)
Go To Commenting
The views expressed herein are the sole responsibility of the author and do not necessarily reflect those of this website or its editors.