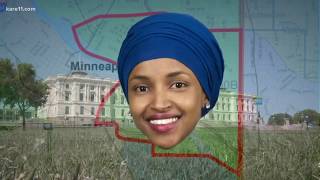 The Israel issue is heating up in American politics, with ABC News publishing a report that progressive Democrats are increasingly willing to criticize Israel and may "reap political rewards" by doing so. The report cites four congressional candidates, in Pennsylvania, NY, Minnesota and Virginia. And it shows that Republicans are publicizing the trend, in an effort to peel away Jewish voters from Democratic ranks. ABC:

"For decades it was seen as too politically risky, but this midterm cycle a growing number of Democratic candidates have begun openly criticizing some of Israel's policies.

"Alexandria Ocasio-Cortez, the first-time candidate who upset 10-term incumbent Rep. Joseph Crowley in last month's Democratic primary, incorporated criticism of Israel's actions into her campaign, condemning what she called a recent "massacre" in Gaza and calling on more Democrats to focus on the struggle of Palestinians."

The Republican Jewish Coalition is attacking Ocasio-Cortez and several other candidates as harbingers of days to come in the Democratic Party.

"Ocasio-Cortez isn't the only harbinger of the decline of @TheDemocrats support for Israel. Ds also nominated @ScottWallacePA & @LeslieCockburn who both have a nasty history of anti-Israel animus, & of course Ilhan Omar, who's vying to replace @keithellison"

The Cook Political Report has an article about Scott Wallace's race against a Republican incumbent in Pennsylvania's first congressional district, saying that Wallace's support for BDS is hurting him in the general election. Note the RJC's characterization of BDS as "anti-Semitic."

"Wallace has the ability to self-fund but may have problems money can't solve...

"The day after the primary, the Forward published a piece documenting that the Wallace Global Fund gave $300,000 to groups supporting the BDS (Boycott, Divest, Sanction) movement against Israel. Wallace says he didn't control the expenditures and disavows BDS, but it took a month for one local Jewish Democratic group to reinstate its support for him.

"On June 21, the Republican Jewish coalition began running a brutal ad attacking Wallace for owning 'mansions in Maryland and South Africa' and 'donating $300,000 to anti-Semitic organizations that promote boycotting Israel.' The final tag line? 'At home in South Africa, too radical for us.' The ad forced Wallace to respond with an almost unheard-of June damage-control ad noting that he 'lives in the house he was born in' and is a 'strong supporter of Israel.'"

That RJC ad is aimed at pulling Democratic pro-Israel voters to the Republican side. It says that Wallace is "so radically anti-Israel, Pennsylvania's top Democrat Jewish organizations refusing support."

Mal Hyman lost a Democratic runoff in South Carolina while being outspoken on Palestinian human rights. And some of the Israel critics still standing are not backing down, per ABC's Roey Hadar.

"[Leslie] Cockburn has not backed down from her criticism of the Israeli government's actions. She still enjoys endorsements from leading Democratic and progressive groups like EMILY's List and the League of Conservation Voters.

"Minnesota State Rep. Ilhan Omar, a Democratic candidate for the Minnesota congressional seat vacated by outgoing Rep. Keith Ellison, has gone a step further, defending her 2012 tweet in which she alleged Israel has "hypnotized the world" and committed "evil doings." Omar, a Somali-American Muslim and former refugee, is looking to replace Ellison, the first Muslim-American elected to Congress.

Omar is in an August primary with several other Democrats. She has called Israel an "apartheid state"! That's refreshing in a discourse where that truth is usually suppressed (ask Jimmy Carter).

Philip Weiss is a longtime writer and journalist in New York. He co-edits a website on Israel/Palestine, Mondoweiss.net, which he founded in order to foster the movement for greater fairness and justice for Palestinians in American foreign policy. He is currently working on a novel about the US in Australia during WW2.
Related Topic(s): Anti-semitic; Democracy; Election; Israel And Us Relations; Israel Lobby; Israeli Abuse; Political Values; Republican, Add Tags
Add to My Group(s)
Go To Commenting
The views expressed herein are the sole responsibility of the author and do not necessarily reflect those of this website or its editors.