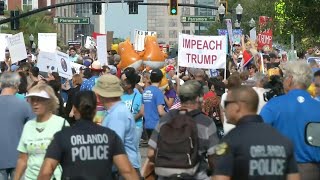 Photo of protesters with "Impeach Trump" sign in Orlando, Florida prior to Trump announcing re-election campaign

On Sunday, Rep. Illan Omar (Dem. MN) tweeted, "Could we take back our democracy if 1.7 million Americans marched for it?"

Meanwhile liberal writer John Nichol's tweeted, "An estimated 1.7 million people are marching in Hong Kong for democracy. This should inspire Americans to step up."

The target for these liberal Dems is of course the "Donald" himself, president Trump.

To be sure Trump is a despicable, self important egotist. But to Dems so indignant of anything Trump he is the stain on our democracy. Get rid of him and all will be right in America again. Ah, not so.

The Dems are so blinded by their hatred of Trump they fail to recognize he's just the latest oval office occupant of a failed electoral system that produces the likes of him. Trump is the symptom, not the disease.

As I wrote previously, "Let's remember Trump didn't start the war in Afghanistan, invade Iraq, initiate the coup in Ukraine, authorize torture, extraordinary rendition, indefinite detention, suspension of habeas corpus, sign the 2010 NDAA, national defense authorization act that gives the president the authority to hold any person indefinitely, including American citizens until the war on terror is over, or any number of illegal acts his predecessors committed before he came on the scene." Lest we forget most Dems in Congress either voted in favor of these aforementioned measures or didn't object to their implementation.

The Dems by using the protests in Hong Kong as the example to follow fail to point out those original peaceful protests-over a bill that would have allowed the extradition of criminal suspects to mainland China that has since been suspended-have been infiltrated and co-opted by agent provocateurs whose aim is to provoke violence and get the legitimate Chinese authorities to over-react and forcefully shut down the protests. That is typical of US color revolution tactics as practiced by the CIA or its invention the NGO, non government organization like NED, the national endowment for democracy, funded by the American people, which acts to undermine the authority of a legitimately elected government and funds the agent-provocateurs to commit violence.

It is worth noting British and American flags are now seen waved by the Hong Kong protesters. Are they not recalling Hong Kong in the colonial era as an entity under British rule where democracy never existed? Or when the American Navy exercised "gun boat diplomacy" over China during that colonial era. There have even been pictures of American State Department diplomatic personnel stationed in Hong Kong seen talking with leaders of the protests. Can one imagine protests in the US where Chinese diplomats were seen meeting with anti war or Occupy protest leaders? The Congress would be up in arms screaming against such outside interference with our democracy.

Let's also remember Hong Kong was ceded back as part of China by the British in 1997. Yes Beijing accepts Hong Cong under a different system but under one China. Therefore Hong Kong is strictly a Chinese domestic issue. The US, Britain or any other foreign entity has no business interfering with internal Chinese affairs.

That Representative Omar, other Dems, Republicans in Congress along with the US corporate MSM overtly support the Hong Kong protesters while condemning the Chinese government may play well with American audiences but unlikely with others familiar with the US color revolution playbook.

As said many times in this space America has real problems and issues that are not even talked about much less dealt with by the politicos in Congress.

Though not Tulsi Gabbard (Dem. HI) a candidate for the Democratic presidential nomination in 2020. She does openly reject America's regime change wars, a government of, by and for the rich and powerful, yet she's been marginalized even by some in the democratic party as un-American, an apologist for Syrian President Assad, a peacenik by the New York Times.

At least she does bring up the issues.

But for most Dems since he was elected in 2016 it's all about Trump. That focus against him won't sway his base. It might even broaden it and get him re-elected next year.

Retired. The author of "DECEIT AND EXCESS IN AMERICA, HOW THE MONEYED INTERESTS HAVE STOLEN AMERICA AND HOW WE CAN GET IT BACK", Authorhouse, 2009
Related Topic(s): China; Democrats; FOCUS; Hong Kong; Trump, Add Tags
Add to My Group(s)
Go To Commenting
The views expressed herein are the sole responsibility of the author and do not necessarily reflect those of this website or its editors.