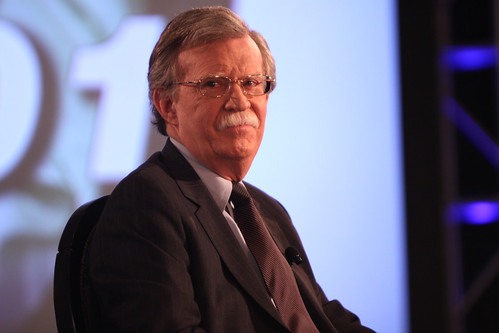 Leaked excerpts from a forthcoming book by former national security advisor John Bolton have staggered the Trump White House and overshadowed the efforts by Trump's lawyers to mount a defense in the Senate impeachment trial, which has continued into its second week. The revelations seem likely to become the focal point of the trial, which is headed toward a vote Friday on whether additional witnesses -- first and foremost Bolton -- should be called to testify.

Bolton is now being embraced and celebrated by the same Senate Democrats who once blocked his nomination to become ambassador to the United Nations on the grounds that he was a dangerous warmonger. Senate Minority Leader Chuck Schumer declared that Bolton had to be allowed to testify in the Senate trial, and Republican senator and former presidential candidate Mitt Romney was the first of several Senate Republicans to agree.

Both the White House and Senate Republican leaders have opposed allowing any additional witnesses, including the four demanded by the Democrats: Bolton, acting White House chief of staff Mick Mulvaney, and two other White House aides, all with direct knowledge of the decision by Trump to withhold military aid from Ukraine last summer.

In the event that at least four Republicans break ranks and join the 47 Democrats to provide a majority to subpoena Bolton, other Republican senators have threatened to demand a subpoena for Hunter Biden, son of former vice president Joe Biden. Hunter Biden held a lucrative position on the board of the Ukrainian gas company Burisma for five years, beginning during the time that his father was in charge of Ukraine policy in the Obama administration.

This would escalate the political warfare in Washington to an unprecedented degree, with the Democrats seeking to remove a president only nine months before the election and the Republicans seeking to politically destroy the candidate long regarded as the front-runner for the Democratic presidential nomination.

A vote Friday on witnesses would come only three days before the February 3 Iowa caucuses, where the first actual votes will be cast for the Democratic presidential nomination, and only four days before the State of the Union speech, when Trump is to address a joint session of Congress on national television.

The de facto alliance between the Democratic leadership and Boltona notorious advocate of the 2003 invasion of Iraq and a fervent supporter of war with Iran -- only underscores the deeply reactionary character of the impeachment effort against Trump. The Democrats have brought charges against Trump not for his real crimes against immigrants, his attacks on democratic rights or his violations of international law, but over an issue on which he has taken a less aggressive approach than the Obama administration -- US policy towards Russia.

The purpose of the nearly $400 million in US military aid, as the Democratic House impeachment managers repeatedly declared last week, was to enable Ukraine to fight Russian-backed forces on its eastern border, so "we don't have to fight Russia here," in the streets of America. The Democrats seek to condition public opinion in preparation for a war between the countries that possess the two largest nuclear arsenals on the planet, a conflict that could destroy the human race.

Bolton, steeped in the anticommunism of the American ultra-right, is sympathetic to the Russia-baiting of the Democrats. Not only was he one of the most aggressive warmongers among the neoconservative apparatchiks of the Bush administration, but in the Trump White House he pushed for missile strikes against Iran last summer, after Iranian air defense forces shot down an unmanned US drone, and he has called for US military intervention in Venezuela.

According to the book manuscript excerpts made public, Bolton wrote that he had discussions with Trump in which the president insisted he would not allow a resumption of military aid to Ukraine until the Ukrainian government agreed to announce a corruption investigation of Joe and Hunter Biden, as well as an investigation into White House claims that Ukraine interfered in the 2016 US election in an attempt to promote the candidacy of Hillary Clinton.

When the Trump legal team began presenting its defense case on Monday, it had already been overtaken by events. One Trump lawyer, Michael Purpura, spent nearly an hour making a detailed examination of the evidence presented by the House impeachment managers in order to claim that Trump had never conditioned the release of military aid on Ukraine announcing an investigation into the Bidens. But Trump's top national security aide at the time, Bolton, had demolished this account in the material published in the New York Times only hours before.

As the day wore on, it became clear that the White House had made the decision not to refer to Bolton directly during the trial presentations, even though Trump tweeted incessantly on the subject, denouncing Bolton's account as a lie aimed at boosting his book sales.

The Trump defense team engaged in lengthy presentations on largely irrelevant topics. Kenneth Starr, the independent counsel who spearheaded the politically motivated Clinton impeachment in 1998-99, bemoaned the too-frequent resort to impeachment as a weapon of political conflict in America. Both Starr and Harvard Professor Alan Dershowitz advanced the dubious claim that a president can be impeached only for a criminal act, and that it was unconstitutional to impeach Trump for abuse of power, the first charge brought by the House Democrats.

An entire presentation was devoted to defending former New York Mayor Rudy Giuliani, Trump's personal lawyer, who played a central role in efforts to generate investigations in Ukraine, an operation described scathingly by Bolton as a "drug deal," according to testimony by Bolton's former aides.

Patrick Martin writes for the World Socialist Website (wsws.org), a forum for socialist ideas & analysis & published by the International Committee of the Fourth International (ICFI).
Related Topic(s): Democrats; Dershowitz; Impeachment Hearing; Senate; Trump And Bolton; Trump Attacks Impeachment; Trump Impeachment; Trump Lawyers; Ukraine, Add Tags
Add to My Group(s)
Go To Commenting
The views expressed herein are the sole responsibility of the author and do not necessarily reflect those of this website or its editors.