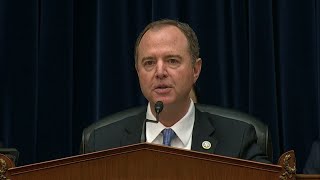 These pronouncements underscore the real nature of the impeachment drive: the Democrats are targeting Trump not for his crimes against immigrants, his attacks on democratic rights or his efforts to build up a racist and fascist movement in America. Instead, they are acting as the representatives and political attorneys for a powerful faction of the national security apparatus that is strongly opposed to Trump on foreign policy issues relating to Russia, Ukraine and the Middle East.

Schiff attacked what he termed the Russian "invasion" of Ukraine, which he said was part of President Vladimir Putin's effort to "reconstitute a Russian empire." He made no mention of the 2014 US-backed coup in Ukraine, spearheaded by fascistic elements and financed by the CIA, which triggered the Russian response in Crimea and the revolt by the predominately Russian-speaking population in the Donbas region of eastern Ukraine.

This theme was taken up in the opening statements of both witnesses.

Deputy Assistant Secretary of State George Kent presented the official State Department version of the events of 2014 in Ukraine, giving the ultra-right coup in Kiev the title of "popular revolution for dignity." He made a series of obscene comparisons between the overthrow of an elected Ukrainian president by the CIA and the American Revolution. According to his account, fascist paramilitaries like the Right Sector, Svoboda and the Azov Battalion are the modern-day equivalent of the Minutemen of 1776; the US role in Ukraine is like that of France aiding the army of George Washington; US military trainers in Ukraine are like Lafayette, Von Steuben, and Pulaski.

Acting US Ambassador to Ukraine William Taylor was more matter-of-fact, declaring that Ukraine "is on the front line of the conflict with a newly aggressive Russia." He said that it was in the national interest of the United States to "deter Russian aggression." He condemned the Russian takeover of Crimea (ratified by popular referendum), and what he called the "invasion" of eastern Ukraine. Any restriction on US military aid to Ukraine was undesirable, and to do so for domestic political considerations in the United States was "crazy."

Both the Democratic majority on the House Intelligence Committee and the two witnesses maintain that Trump put pressure on the Ukrainian government, particularly in a July 25 telephone call to Ukraine President Volodymyr Zelensky, and withheld military aid already approved by Congress in order to serve his own personal political needs, at the expense of US foreign policy requirements.

In his usual bullying manner, Trump demanded that Zelensky do him a "favor" by reopening a Ukrainian investigation into Hunter Biden, son of former Vice President Joe Biden, a leading contender for the Democratic presidential nomination in 2020. He also sought Ukrainian assistance in pursuing claims that the Democratic National Committee obtained aid from Ukraine for the Clinton presidential campaign in 2016.

The two State Department witnesses also complained about the creation of an "irregular" channel of White House communication with and pressure on the Ukrainian government, involving Trump's personal lawyer Rudy Giuliani, assisted by the US ambassador to the European Union, Gordon Sondland, and the US special envoy to Ukraine, Kurt Volker. Under Giuliani's direction, these officials were explicitly demanding that Ukraine investigate the Bidens and the DNC as a condition for unblocking the flow of military aid and obtaining a visit to the White House for President Zelensky.

After the opening statements, the hearing unfolded with completely predictable, and virtually scripted, attacks and counter-attacks.

The ranking Republican on the House Intelligence Committee, Devin Nunes, called the impeachment inquiry a carefully orchestrated smear campaign, begun after the failure of the lengthy media-driven campaign portraying Trump as an agent of Russia, which culminated in the investigation led by former FBI Director Robert Mueller.

He raised three demands on behalf of the Republican minority: that the CIA "whistleblower" whose complaint was the starting point for the impeachment inquiry be called to testify, particularly about his contacts with the Democrats before he filed the complaint with the inspector general of the intelligence community; that the committee hear evidence about alleged Ukrainian interference in the 2016 election to help Hillary Clinton; and that Hunter Biden be called to testify about what he did for four years in return for a $50,000-a-month payment from the big Ukrainian gas company Burisma.

At the end of the day, the committee tabled a Republican resolution to call the whistleblower as a witness, by a 13-9 party-line vote.

Nunes and several other Republican questioners pointed out that the Trump administration had provided more lethal military aid to Ukraine that the previous administration of Democrat Barack Obama, including selling Javelin anti-tank missiles. In effect, the two parties were vying for the "credit" of being the most fervent promoter of war between Ukraine and Russia.

Patrick Martin writes for the World Socialist Website (wsws.org), a forum for socialist ideas & analysis & published by the International Committee of the Fourth International (ICFI).
Related Topic(s): Democrats; Impeachment; Intelligence; Russia And Us Conflict; Ukraine, Add Tags
Add to My Group(s)
Go To Commenting
The views expressed herein are the sole responsibility of the author and do not necessarily reflect those of this website or its editors.