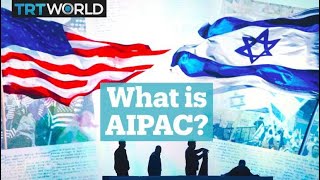 AIPAC, the powerful pro-Israeli lobby in the US
(Image by YouTube, Channel: TRT World)   Details   DMCA

Last night in Connecticut, Sarah Walsh of AIPAC told a Conservative synagogue audience that the lobby group is striving to ensure that support for Israel remains bipartisan, but there are more signs that progressive Democrats feel they are able to criticize Israeli policies.

First, Rebecca Vilkomerson of Jewish Voice for Peace says there's been a reluctance even in the Democratic establishment to defend Israel during the Gaza slaughter. In an interview with the Real News, Vilkomerson said Trump's embrace of Netanyahu has opened the door for formerly-silent Democrats to be critical of Israel. "There's a willingness to look at Israel's actions that maybe wasn't possible when Obama was president."

"I think with the exception of [Chuck] Schumer, no Democrats have been defending Israel's actions. In fact, quite a number, in fact over a dozen, have spoken out against what Israel has done over the course of the last six weeks. And you contrast that with 2014, when I think it was something like 78 senators signed a statement supporting the Gaza war. So there has been a shift in terms of Congress and who's willing to speak out and being able to speak out, and that there's enough backing from their own constituents to speak out that they're not going to be punished by AIPAC or other organizations... [Aaron Mate points out that House whip Steny Hoyer has also given Israel a blank check] We have very very far to go. Also, not defending is very different from saying Stop, and there are lots of tools that the U.S. government has to stop Israel from what it's doing and they're using none of them."

Senator Bernie Sanders has obviously been a leader here. He has released videos about Gaza and condemned Israeli killings of unarmed protesters.

In May he organized that senators' letter, which urged the Secretary of State to pressure Israel to ease the blockade on Gaza, to allow the movement of more goods and equipment and energy into the Strip, and people out of it, so as to relieve a humanitarian crisis. The letter was a "human rights" letter. It said nothing about Israel's massacre of protesters, but said that the ongoing "deprivation and despair" in Gaza was fueling "extremist" groups and factionalism that could "incite violence against Israel" and could even "spark an uprising."

The letter was openly critical of Israel. While saying that Hamas bears "significant responsibility for the deteriorating situation" due to its repression and corruption and "insistence on pursuing a violent struggle against Israel," the letter also said, Israel's "continuing control of Gaza's air, sea and northern, southern and eastern borders, and its restrictions on the freedom of movement of people, legitimate goods and equipment in and out of Gaza, have made the humanitarian situation worse."

Two days ago, the Intercept reported that Democratic megadonor Haim Saban lashed out against the 13 Senators in an arrogant, angry emai l. He talked down to the senators:

"Senators, for you to listen to Senator Sanders and accuse Israel of being the main culprit is outrageous, misinformed, offensive and shows a lack of understanding of the region's basic fundamentals. Do your homework, unless you have chosen to blindly follow Senator Sanders' ill advised, misinformed, simplistic, and ignorant lead...

"Senator Sanders, if you want to opine on the region, then do your homework. And if you like, I would have a grand old time teaching you, as there is much for you to learn."

Win Without War, a progressive coalition organization with establishment/church members, promptly tweeted its defiance of Saban:

"These 12 senators deserve praise, not attacks, for listening to their constituents & doing what they believe is right. Billionaire mega donors shouldn't be making U.S. foreign policy @SenSanders@SenFeinstein @SenatorLeahy @SenatorCarper@SenSherrodBrown"

Later Robert Naiman of Just Foreign Policy (a constituent of WWW), explained the significance of the moment in an email that was passed around (and Naiman allowed me to quote from). The center-left has been afraid of AIPAC and Haim Saban. Not any longer.

"[The] willingness to criticize the Israeli government is becoming more mainstream in the Democratic Party, significantly thanks to Bernie, as well as the movement of public opinion among young people, that Bernie is helping to bring to light. WWW didn't do I-P before. Now they feel comfortable doing something like this. Because they're standing next to Bernie and a bunch of Democratic Senators. ...

"I was... jazzed about WWW's willingness to slam Haim Saban. That was a taboo among Democrats before. That was a huge part of the unwillingness of Dems to speak out before, the fear of Haim Saban, not just the fear felt by Democratic elected officials, but the fear held by Democratic advocacy groups that don't generally work on I-P but might speak up sometimes. There was always a kind of wall. Over here we have the progressive groups that do I-P. And otherwise we have a bunch of multi-issue progressive groups that do different things but won't touch I-P, out of fear of AIPAC and Haim Saban. That dynamic is changing, and that is a big deal, people losing their fear of Haim Saban and AIPAC. MoveOn spoke up on Gaza. MoveOn never spoke up on I-P before."

Philip Weiss is a longtime writer and journalist in New York. He co-edits a website on Israel/Palestine, Mondoweiss.net, which he founded in order to foster the movement for greater fairness and justice for Palestinians in American foreign policy. He is currently working on a novel about the US in Australia during WW2.
Related Topic(s): AIPAC; Democrats Progressive; Fear As Policy; Haim Saban; Israel, Add Tags
Add to My Group(s)
Go To Commenting
The views expressed herein are the sole responsibility of the author and do not necessarily reflect those of this website or its editors.