By Ariel Gold and Medea Benjamin 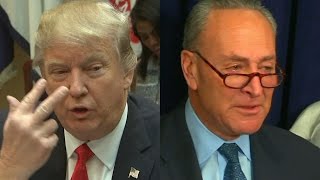 Democrats usually jump at opportunities to counter Trump's reckless and incendiary policies. That is, when the policies don't have to do with the state of Israel.

The origins of the Jerusalem controversy date back to the 1947 UN General Assembly partition dividing Palestine into two states (under protest by the majority Palestinian population living there). Rather than giving Jerusalem either to Israel or Palestine, the UN recommended the city be corpus separatum, a "separated body," administered by the United Nations. The UN's plan was never implemented. Instead, in 1948, Israel ended up with control of the Western half of the city and Jordan held East Jerusalem and the West Bank. In 1967, Israel "unified the city" by occupying the eastern half as well.

Despite numerous UN resolutions calling for Israel to withdraw, Israel has continued to hold the land and take concrete measures to annex it. These actions have included the building of the separation wall to include East Jerusalem within Israel's boundaries, revoking the residency permits of Palestinian Jerusalemites, home demolitions and ongoing settlement growth. A 2017 bill in the Knesset even tried to formally annex 19 settlements surrounding Jerusalem into the Jerusalem municipality. Transportation Minister Israel Katz proudly declared the intent of the legislation as being to "ensure a Jewish majority in the united city and to expand its borders by adding 150,000 residents to the area of a greater Jerusalem."

Israeli anti-settlement group, Peace Now, succeeded in generating enough opposition that its authors watered it down from blatant annexation. The Prime Minister delayed the planned October 2017 vote on it due to lack of support and possible U.S. disapproval. However, if passed, it would still amount to de facto annexation of the 19 settlements.

From 1967 through today, all countries in the world, in accordance with the UN's original plan, have refused to recognize Jerusalem as Israel's capital. U.S. policy had been that the city's status should be not be determined unilaterally but through negotiations. In 1995, the U.S. Congress reversed this position by passing the Jerusalem Embassy Act, which mandated the U.S. be moved from Tel Aviv and Jerusalem be recognized as the capital of Israel. Democratic president Bill Clinton refused to sign the act, saying it "could hinder the peace process" and used the presidential waiver included in the legislation to prevent the embassy move... Following Clinton, all US Presidents have signed waivers every six months, as required by the 1995 act, to keep the US embassy in Tel Aviv because they know the dangerous spark not doing so could ignite in an already volatile Middle East.

Trump's announcement stating that Jerusalem is the capital of Israel and directing the State Department to begin moving the embassy sparked protests across the world. In the West Bank and Gaza, where even nonviolent protests are met with military force, the first few days saw at least two Palestinians were killed and almost 800 injured. Israeli airstrikes on Gaza that Friday, killed two and injured at least 25 people, including a six-month-old baby who was placed in critical condition. Whether the baby is still alive or has succumbed to his wounds is unknown.

One would think Democrats would be be jumping at the chance to hammer Trump for his reckless plans and their consequences, pitting us, once again, against the rest of the world and obliterating our credibility to be an honest broker. Instead, most have been, silent or, worse yet, taking credit themselves for Trump actions.

Senator Ben Cardin, ranking member of the Foreign Relations Committee, responded to Trump's actions with the affirmation that "Jerusalem is the capital of the State of Israel and the location of the U.S. Embassy should reflect this fact."

Senate minority leader Chuck Schumer actually bragged after Trump's announcement that he had helped convince Trump to follow through with his campaign promise to move the embassy. "Moving the embassy as soon as possible would appropriately commemorate the fiftieth anniversary of Jerusalem's reunification," Schumer said in October 2017. According to international law, however, Jerusalem has spent the past 50 years being occupied, not unified.

Democratic whip Steny Hoyer agreed as well, saying that it was simply "a fact of history that cannot be denied." Representative Engel of New York stated, "this decision is long overdue and helps correct a decades-long indignity." Florida Representative Schultz said "We must work toward a day where the entire world recognizes Jerusalem as the capital of Israel." Representative Deutch, also from Florida, released a joint statement with Republican Congresswoman Ros-Lehtinen saying, "There is no debate that the Jewish people have a deep-rooted religious, cultural and historic tie to Jerusalem, and today's decision reaffirms that connection." Minority House Leader Nancy Pelosi said "Jerusalem is the eternal capital of the Jewish homeland," but added that "in the absence of a negotiated settlement between Israel and the Palestinians, moving the U.S. embassy to Jerusalem now may needlessly spark mass protests, fuel tensions, and make it more difficult to reach a durable peace."

Not all democrats have fallen into line behind Trump's decision. The strongest reaction of opposition to Trump's decision has come from the Congressional Progressive Caucus co-chairs Mark Pocan and Raul M. Grijalva and Peace and Security Task Force Chair Barbara Lee. They released a joint statement. Trump's decision fails "to take into consideration the serious and delicate nature of the situation," said Rep. Grijalva. "President Trump's decision to declare U.S. recognition of Jerusalem as the capital of Israel, before reaching a finalized peace deal or two-state solution between the Israelis and the Palestinians, hurts future agreements and will create unnecessary tensions and violence in the region," said Rep. Pocan. "Make no mistake," said Representative Lee. "This decision sabotages our diplomatic efforts and makes it even harder to achieve peace." The statement, however, did not have the signatures of the other 72 members of the caucus.

In advance of the announcement Senator Bernie Sanders put out a statement saying, "There's a reason why all past U.S. administrations have avoided making this move, and why leaders from all over the world, including a group of former Israeli ambassadors, have warned Trump against doing it: It would dramatically undermine the prospects for an Israeli-Palestinian peace agreement, and severely, perhaps irreparably, damage the United States' ability to broker that peace."

Senator Dianne Feinstein, penned a letter to in advance of Trump's action. "I urge you to reject calls to recognize Jerusalem as the capital of Israel...The future of Jerusalem is an issue that should be decided by Israel and the Palestinians, not unilaterally by the United States. Recognizing Jerusalem as Israel's capital -- or relocating our embassy to Jerusalem -- will spark violence and embolden extremists on both sides of this debate."

Related Topic(s): AIPAC; Democratic; Israeli-palestinian; Jerusalem-- Conflict; Pro-israel; Resistance; Trump Cruelty; Trump Foreign Policy, Add Tags
Add to My Group(s)
Go To Commenting
The views expressed herein are the sole responsibility of the author and do not necessarily reflect those of this website or its editors.