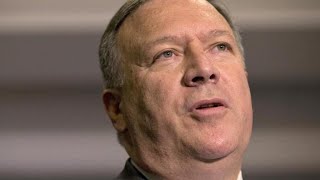 Imagine a nominee for Secretary of State who is so bigoted that he once accused Christian organizations and houses of worship of remaining silent about crimes committed in the name of Christianity by groups like the far-right Army of God or the Ugandan Lord's Resistance Army of Joseph Kony.

Imagine that this nominee said that the "silence" from the best-funded Christian advocacy organizations and many churches across America is absolutely deafening," that it "casts doubt upon ... adherents of the Christian faith," and that it made Christian leaders "potentially complicit" in acts of terror like the murder of an abortion doctor or the bombing of a clinic.

Or, imagine that his targets are Jewish groups. Picture him saying, "There are organizations and networks here in the United States tied to radical Judaism in deep and fundamental ways. They're not just in places like Lebanon and Uganda, but in places like Coldwater, Kansas, and small towns all throughout America."

Now imagine that three Democratic Senators said they would vote to make him the nation's next Secretary of State.

The Bigot, Part I

Replace "Judaism" and "Christianity" with Islam, and you've got Mike Pompeo, Donald Trump's nominee for Secretary of State. Democratic Senators Heidi Heitkamp, Joe Donnelly, and Joe Manchin have already said they will vote to confirm Pompeo. If they do, they will have put a bigot in the nation's highest diplomatic position -- and put a stain on their own party's right to claim the mantle of inclusion.

After the Boston Marathon bombing, a smug-looking, inappropriately smiling Pompeo took to the House floor to condemn mainstream Muslims. "The silence in the face of extremism coming from the best-funded Islamic advocacy organizations and many mosques across America is absolutely deafening," Pompeo said. "It casts doubt upon the commitment to peace by adherents of the Muslim faith." He went on to call Muslim leaders "potentially complicit these acts."

In fact, Muslim groups like the Council on American-Islamic Relations (CAIR) had promptly condemned the bombing, as they always do, even though they shouldn't be obliged to do so. Pompeo was lying.

The attack on Muslims wasn't a one-off. Pompeo has a long history of anti-Muslim comments, and of associating with Islamophobic hate groups and leaders.

Pompeo isn't big on the separation of church and state, either. "To worship our lord and celebrate our nation at the same place is not only our right, it is our duty," Pompeo once proclaimed from a church pulpit.

If Mike Pompeo becomes Secretary of State, the global face of the United States will be that of a man who fears and despises 1.8 billion Muslims. That's not just wrong. It's also placing our foreign policy in the hands of someone who has expressed hostility toward nearly one out of every four people on the planet.

Pompeo's bigotry isn't limited to Muslims. He's hostile to the LGBTQ community, too. He opposed the repeal of the military's oppressive "Don't Ask, Don't Tell" policy, saying that "we cannot use military to promote social ideas that do not reflect the values of our nation." His other bigoted words and deeds include the promotion of several anti-marriage equality bills. He described the Supreme Court's marriage equality ruling as "a shocking abuse of power."

"America had worshipped other Gods and called it multiculturalism," Pompeo once said. "We'd endorsed perversion and called it an alternative lifestyle."

During his Senate hearing, Pompeo refused to say whether he considered homosexuality a perversion. "Senator," he responded, "when I was a politician, I had a very clear view on whether it was appropriate for two same-sex persons to marry. I stand by that."

As Secretary of State, Pompeo will be a voice for hate and repression rather than justice and equality.

Related Topic(s): Bigotry; Climate; Disgrace; Faith; Muslims; Nomination; Secretary Of State Mike Pompeo; Torture, Add Tags
Add to My Group(s)
Go To Commenting
The views expressed herein are the sole responsibility of the author and do not necessarily reflect those of this website or its editors.