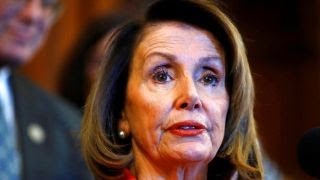 LEADING CONGRESSIONAL DEMOCRATS have spent the last year relentlessly accusing Donald Trump of being controlled by or treasonously loyal to a hostile foreign power. Over the last several months, they have added to those disloyalty charges a new set of alleged crimes: abusing the powers of the executive branch -- including the Justice Department and FBI -- to vindictively punish political opponents while corruptly protecting the serious crimes of his allies, including his own family members and possibly himself.

The inescapable conclusion from all of this, they have relentlessly insisted, is that Trump is a lawless authoritarian of the type the U.S. has not seen in the Oval Office for decades, if ever: a leader who has no regard for constitutional values or legal limits and thus, poses a grave, unique, and existential threat to the institutions of American democracy. Reflecting the severity of these fears, the anti-Trump opposition movement that has coalesced within Democratic Party politics has appropriated a slogan -- expressed in the hashtag form of contemporary online activism -- that was historically used by those who unite, at all costs, to defeat domestic tyranny: #Resistance.

One would hope, and expect, that those who genuinely view Trump as a menace of this magnitude and view themselves as #Resistance fighters would do everything within their ability to impose as many limits and safeguards as possible on the powers he is able to wield. If "resistance" means anything, at a minimum it should entail a refusal to trust a dangerous authoritarian to wield vast power with little checks or oversight.

Yesterday [Jan 11] in Washington, congressional Democrats were presented with a critical opportunity to do exactly that. A proposed new amendment was scheduled to be voted on in the House of Representatives that would have imposed meaningful limits and new safeguards on Trump's ability to exercise one of the most dangerous, invasive, and historically abused presidential powers: spying on the communications of American citizens without warrants. Yesterday's amendment was designed to limit the powers first enacted during the Bush years to legalize the Bush/Cheney domestic warrantless eavesdropping program. The Intercept's Alex Emmons on Wednesday detailed the history and substance of the various bills pending in the House.

Related Topic(s): Donald Trump; Spying; Surveillance; Trump Illegality; Warrantless Searches, Add Tags
Add to My Group(s)
Go To Commenting
The views expressed herein are the sole responsibility of the author and do not necessarily reflect those of this website or its editors.