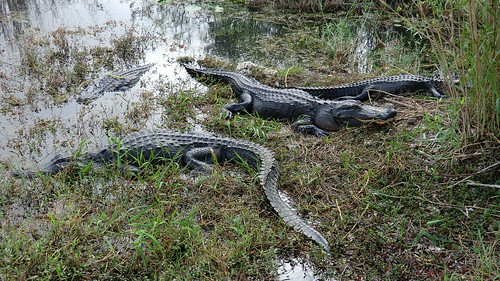 alligators in the swamp
(Image by Traveller-Reini)   Details   DMCA

This is where Democrats are still losing it:

Whatever happened to the Medicare-For-All proposal that Sanders and other Democrats announced a while back?

If it were the Republicans that were in favor of such a bill then that message would have saturated the airwaves until we all begged for it. Instead we're still talking only about the Republicans' talking points: repeal or destroy Obamacare, configure associations, cross borders, reimbursement arrangements, and more smoke and mirrors that eliminate healthcare for many.

Where's the Medicare For All Bill? Why aren't the Democrats pushing that down Republicans' throats until they choke on their own lies.

Even with Trumps aggressive anti-Obamacare campaign the American public is craving and waiting for such a plan that's easy to understand, a program that if you just explain it to them in a truthful, mature fashion it will take off on its own merit.

Instead, Trump is still president despite trying to tear apart our country".doesn't that tell you Democrats something"that you are allowing that to happen by hiding in the background, waiting to Trump to implode?