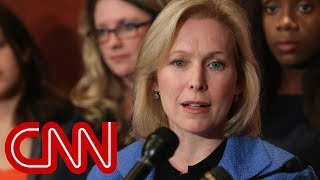 So I wrote a column saying that Sen. Kirsten Gillibrand has been beautifully positioned -- by a combination of Donald Trump's fear of self-confident women, the rapid emergence of sexual misconduct by prominent men as a social issue, the newly demonstrated political power of women of color, and her own intelligence, commitment and ambition -- to run for president in 2020.

Here's a sampling of comments I received:

-- "She''s done, as far as I'm concerned, and I voted for her. What she did to Al Franken for her own benefit is a disgrace. She needs to be primaried, and voted out."

-- "Another Democratic hypocrite just like the rest of the party."

-- "Just another Schumer loser and certainly a disgrace for NY."

-- "I think almost every single politicians in New York is corrupt. For example, was she part of Hillary Clinton's 100 member leadership team? If so, that kills it for me right there. " I mean Bernie Sanders ended up supporting Hillary, but he had to, I think. He has my vote in 2020, and my undying allegiance."

Of course there were the usual trolls who can't spell or comment without being vulgar -- the world the Internet has legitimized. There were also some positive comments about Gillibrand, but that response was markedly muted, with Democrats in my and Gillibrand's home state of New York apparently sharing the uncertainty of Democrats nationally as to what to make of this outspoken junior senator who had just called on the groper-in-chief to resign.

The reaction of David Axelrod, one of Barack Obama's chief advisers, was typical: "There should be rigorous pursuit of these kinds of charges, but right now there are no rules. She's been a leader on the issue [of sexual assault]. But the danger for her is looking so craven and opportunistic it actually hurts her."

Someone identified as a top Democratic operative was quoted thusly: "If you cared about the Democrats and 2018, you would be calling for hearings [for Trump]. When you call for resignation, you're jumping the gun. I'd rather have congressional candidates being asked, 'Do you support hearings?' Calling for resignation is not really what's best for the party, but it's good for her."

So, bad for her or good for her? Gillibrand isn't waiting for Democratic "operatives" to decide.

In an interview with Vanity Fair, the senator provided some insight into her thinking: "I take calculated risks. I measure. I assess risk very intensely. And then I make a judgment. When you play tennis as a kid, you're going to win sometimes and lose sometimes, and you learn how to behave well under both circumstances. Such a great life lesson because if you're not afraid of losing, you'll take a risk -- like running for office."