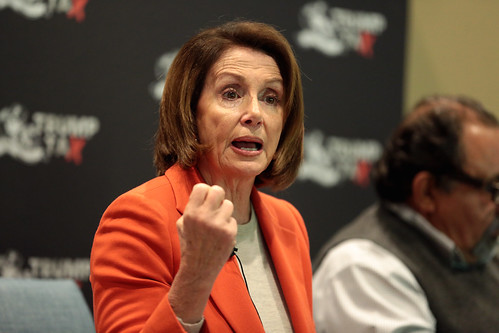 "The general sentiment of mankind is that a man who will not fight for himself, when he has the means of doing so, is not worth being fought for by others, and this sentiment is just," Frederick Douglas said in 1857. "The poet was as true to common sense as to poetry when he said, 'Who would be free, themselves must strike the blow.'"

Do not call for a battle for which you are not willing to fight yourself. To do otherwise is to earn contempt.

For three years Congressional Democrats repeatedly took to the nation's airwaves and prose media outlets to tout the Mueller Report and their certainty that the former FBI director's team would uncover proof that Donald Trump and his team were traitors because they conspired with a foreign adversary, the Russian Federation, to steal the 2016 presidential election from Hillary Clinton. Mueller would provide the evidence needed to justify impeachment.

Though Democrats dropped the I-word from their rhetoric near the end of the campaign, Democratic voters' support for impeaching Trump motivated voter turnout in the 2018 midterms and led to Democratic gains. A June 2018 NBC News/Wall Street Journal poll found that 70% of Democratic voters wanted Democrats to retake the House of Representatives so they could hold impeachment hearings.

Like a dog who caught a car (like Trump caught a presidency he reportedly didn't want), Democrats captured the House. But they don't want to impeach. Nancy Pelosi and other party leaders say impeachment would divide the country, turn off swing voters and risk the kind of backlash Republicans suffered in 2000 after they voted to impeach Bill Clinton. As New York Times columnist Gail Collins, a Democrat, advises, "Let's just vote the sucker out" next year.

Refusal to impeach is a serious tactical error. It could cost them the 2020 election.

Like most bad tactical decisions, this one follows a faulty analysis of the past and applying historical lessons to a present under which conditions have changed. First, Republicans hardly got destroyed in 2000. They won the presidency (albeit via a judicial coup d'etat), held on to the House following the net loss of one seat, and the Senate went to a tie following a net four-seat loss. Second, polarization has resulted in the virtual extinction of the once mighty swing voter. Third, there was no bipartisan consensus that lying about receiving oral sex was impeachable. Trump didn't collude with Russia but even many Republicans have trouble with Trump's WWE temperament, early morning tweet-storms and overall erratic personality (personality, not politics, would form a solid foundation for impeaching the current president).

Trump is in a much better position than he was in 2016. Now he leads a united GOP. He probably won't face a significant primary challenger. His base adores him. Though many have been left behind, by most measures the economy is booming. And he hasn't started any big new wars. By historical standards this feels something like peace. Democrats should not underestimate him again.

Presidential elections are referenda on the incumbent. Incumbent Trump is sitting pretty, especially now that he can credibly claim exoneration on claims of Russian collusion. Unless something big happens, inertia rules; enough Americans go ain't-broke-don't-fix-it to reelect him.

As the party out of power, the only chance Democrats have is to promise a future that's dramatically more appealing as well as practical to create. Most of the major Democratic presidential contenders have embraced Bernie Sanders' holy trinity: Medicare for All, $15 minimum wage, free public college tuition. Improvements to be sure, but exciting enough inducements to defeat a strong incumbent? I doubt it.

This is where Frederick Douglas comes in. Democrats have a well-earned reputation for snatching defeat out of the jaws of victory, often due to a failure of nerve. Democrats whine. They preen. But they don't fight.

The Republican Senate guarantees Trump wouldn't be removed from office, yet impeaching the president would help assure the Democrats' repeatedly-disappointed progressive base that the party's long run of appeasing Republicans had finally come to an end. Democrats don't stand a chance against a unified Republican party without firming up their base too.

Moreover, Democrats have painted themselves into a corner. They pimped the Mueller Report and Russian collusion as the road to Trump B Gone only to have that narrative evaporate in light of the facts. Douglas was right. Asking the voters to do next year what they're not willing to do themselves this year -- get rid of Trump -- is an invitation for nothing but the brutal contempt of mass indifference.

Related Topic(s): 2020 Elections; Democrats; Election; Impeach Trump; Trump Crime, Add Tags
Add to My Group(s)
Go To Commenting
The views expressed herein are the sole responsibility of the author and do not necessarily reflect those of this website or its editors.