The opposition party should embrace a sweeping reform agenda that embraces the promise of voting rights, competitive elections, and genuinely representative democracy. 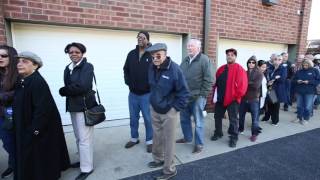 American democracy is not working. We have a president who lost the popular vote by almost 3 million ballots, a Congress that reflects gerrymandered district lines rather than the will of the people, and a voting system that discourages rather than encourages the high turnouts that are needed to establish a genuinely representative democracy.

The Republican Party, which has benefited from this dysfunction, is in no rush to change things. Indeed, it has at its highest levels embraced the voter-suppression lies and scheming of charlatans such as Kansas Secretary of State Kris Kobach and President Trump's Orwellian "Presidential Advisory Commission on Election Integrity." So it falls to progressive Democrats, nonaligned independents, and third-party activists to take the lead in the struggle for democratic renewal.

For the Democrats, there are two ways to address the crisis. First, they can carry on as they always have and hope that they get better at being an opposition party within a fundamentally flawed system. Second, they could propose to reform the system in ways that would begin to realize the promise of competitive elections and popular democracy.

Congressman Don Beyer has chosen the bolder route. Last week, the Virginia Democrat proposed the Fair Representation Act, a plan to democratize congressional elections with a bold reform that could also be used to bring real competition to state legislative contests.

Explaining that "polarization and partisanship, both among voters and in Congress, have reached dangerous and scary heights," Beyer says: "The Fair Representation Act is the bold reform America needs to be sure every vote matters, to defeat gerrymandering, and ensure the House of Representatives remains the people's House."

Rob Richie, the executive director of FairVote, which has worked with Beyer to promote the measure, says, "The Fair Representation Act is the most comprehensive approach to improving congressional elections in American history."

Related Topic(s): Democracy; Democrats; Elections; Gerrymandering; Republican; Voting, Add Tags
Add to My Group(s)
Go To Commenting
The views expressed herein are the sole responsibility of the author and do not necessarily reflect those of this website or its editors.