That should count for something in the race for the party's presidential nominationbut so close to Super Tuesday, is this coming too late? 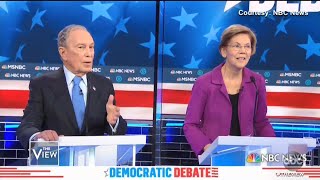 Elizabeth Warren enlivened and enlightened the 10th Democratic presidential debate with a soliloquy on supporting public education that reminded everyone who was paying attention that she is not just ready to govern, she is excited by the prospect.

For Warren, it was an electric moment at a point when her campaign needs juice. She's trailing in the polls and too frequently neglected by the media -- except when she is shredding billionaire contender Mike Bloomberg. Even her own supporters worry that the senator from Massachusetts is hitting her mark at too late a point in the race. Yet Warren's ability to grab hold of issues and to infuse them with insight and passion is such that she cannot be written off.

That ability was on full display Tuesday night during the all-too-brief moment when education was on the agenda. As the last debate before the South Carolina primary and the 14 contests on Super Tuesday turned to the oft-neglected issue, Warren took charge. Other candidates responded -- Vermont Senator Bernie Sanders with a progressive populist call for raising teacher pay; Bloomberg with an overtly-defensive attempt to distance himself from a record that infuriated education activists. But it was Warren who answered the question as a Democratic presidential nominee must.

Spontaneous applause erupted from a Charleston crowd that was thick with political insiders and donors -- and that, observers noted, could be heard booing Sanders and Warren during exchanges with Bloomberg.

Related Topic(s): Debate; Democrats; Education For All; Education Funding; Elizabeth Warren; Issues; Public Education; Public Interest; Public Schools, Add Tags
Add to My Group(s)
Go To Commenting
The views expressed herein are the sole responsibility of the author and do not necessarily reflect those of this website or its editors.