Since Trump became president, Democrats have been on a legislative winning streak that sends a powerful signal about resistance politics. 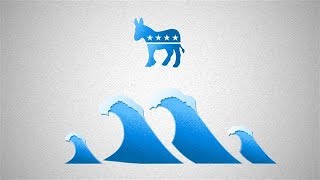 Lauren Arthur is a former middle-school teacher who campaigned as a progressive Democrat in a special election to fill a Missouri State Senate seat that a Republican won in 2016 with more than 60 percent of the vote. Her race, whichhighlighted support for expanded funding of education and access to health care, was run in a district that backed Republican presidential nominees Donald Trump in 2016 and Mitt Romney in 2012.

It should have been an uphill bid.

It wasn't. On Tuesday, Arthur beat her well-funded and serious Republican foe by a landslide, winning 60 percent of the vote.

That was a big victory for Arthur, a labor-backed state representative who declared in her victory speech that "For too long the priorities and pet projects of billionaires and corporations have been put ahead of investing in Missourians. We sent a message loud and clear that we demand great public schools [and] a transparent and responsive state government."

But it was also a big victory for Democrats nationally, as this is the 42nd Republican legislative seat that has flipped to the Democrats since Donald Trump assumed the presidency.

The legislative-district wins for Democrats tend to fly under the radar. They are not as closely covered as the flipping of Alabama's US Senate seat by Democrat Doug Jones last year, or the flipping of a Republican-held US House seat by Pennsylvania Democrat Conor Lamb earlier this year. But there is a good case to be made that they provide the best measure of the resistance voting that is taking place across the country in the Trump era.

They signal that candidates who run bold campaigns can mobilize voters and win legislative seats that will be essential to winning back statehouses that Republicans won in the "wave" elections of 2010 and 2014.

Hailing "a 24-point swing from Donald Trump's 49-45 percent victory here in 2016," progressive analyst Carolyn Fiddler said, "Arthur is a staunch progressive who supports government ethics reforms, equal rights for Missouri's LGBTQ residents, and local autonomy for cities that want to raise their local minimum wage or enact gun-safety ordinances. Tuesday's special election took place in the shadow of the recent resignation of disgraced former Governor Eric Greitens, and it may foreshadow the impacts of the Republican's misdeeds on his party in upcoming elections. Arthur, for one, absolutely linked her GOP opponent to Greitens and the 'corrupt' state capitol in a campaign ad -- a tactic other Democratic campaign are likely to adopt for the fall."

Related Topic(s): Blue Wave; Democrats; Democrats Winning Back The United States Senate; Elections; Rights, Add Tags
Add to My Group(s)
Go To Commenting
The views expressed herein are the sole responsibility of the author and do not necessarily reflect those of this website or its editors.