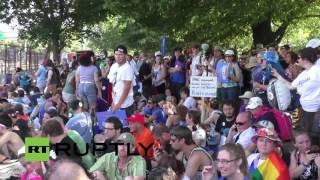 The glitz, the glamour, and all the lofty speeches did not tell the true story of what happened in Philadelphia. Bernie tried to bring his supporters into the fold, but as I wrote in the past, they are not sheep. The Democratic Party is divided. Filmmaker Josh Fox talked about the cultural differences between the supporters of the campaigns. He nailed it: the Clinton delegates were dressed in suits and expensive dresses, while the Sanders delegates were in shorts and t-shirts.

Ding, ding, ding ... That's it; that explains everything. Let's test Fox's theory with the differences on the issues.

Sanders delegates want $15 an hour now. Clinton delegates have no issue with getting there eventually, but they think it would be better to work our way up to $15. Let's face it, they make more than $15 an hour already. The Sanders supporters know what it's like to try to raise their families on less than a livable wage. They are not willing to wait.

There is more common ground here. The middle class is also struggling with college debt. That is what led to the compromise on the platform plank. Sanders supporters still believe a public education should be free, from kindergarten through college. I think Clinton supporters agree, but don't think we can afford it for everyone. The compromise was free college education for everyone whose family makes less than $150,000. I hope a family with more than one child isn't punished and forced to pay the full ride for all of the kids.

I think it's the economic issues that separate the delegates, so we will move on. The new Democratic Party leadership had better fix the class divide that is developing in the party or they'll risk losing this November.

Scott Galindez is a graduate of Syracuse University, a US Army veteran, and currently the Political Director of ReaderSupportedNews.org. Scott's activism began at an anti-nuclear vigil in Lafayette "Peace Park" across from the White House. Scott (more...)
Related Topic(s): Bernie Sanders; Democrats; Hillary Clinton; Revolution; Supporters, Add Tags
Add to My Group(s)
Go To Commenting
The views expressed herein are the sole responsibility of the author and do not necessarily reflect those of this website or its editors.