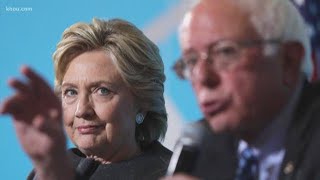 Top Democratic officials and Democratic-aligned media outlets are engaged in a coordinated offensive against the campaign of Vermont Senator Bernie Sanders.

Clinton was being interviewed about a forthcoming documentary set to premiere at the Sundance Festival and air on Hulu beginning March 6. "He was in Congress for years. He had one senator support him," Clinton says. "Nobody likes him, nobody wants to work with him, he got nothing done. He was a career politician. It's all just baloney and I feel so bad that people got sucked into it."

Asked if this characterization still held good, Clinton told the Hollywood Reporter that it did . Asked if she would support Sanders if he won the Democratic nomination this year, Clinton declined to say, adding, "I'm not going to go there yet. We're still in a very vigorous primary season."

She went on to denounce Sanders and his core advisers -- who include his wife Jane, former Ohio state Senator Nina Turner and other women -- as incorrigibly sexist. "It's his leadership team. It's his prominent supporters. It's his online Bernie Bros and their relentless attacks on lots of his competitors, particularly the women," she said, adding that Sanders "seems to really be very much supporting it."

With this vicious personal smear, Clinton reminds the public why she was so hated in 2016. As the embodiment of the corrupt Democratic Party establishment, she managed to lose the presidential election to Donald Trump.

Her refusal to say that she would support Sanders is remarkable. In effect, Clinton is suggesting that she might side with Trump against the nominee of her own party.

Clinton's statement is the culmination of a week of political provocations and personal attacks. The offensive was set off by the political stink bomb launched with the help of CNN by Senator Elizabeth Warren, who claimed that at a private meeting in 2018 -- attended only by the two senators, without aides -- Sanders told her that a woman could not win the presidency in 2020.

Sanders has repeatedly denied this claim and pointed out its absurdity, since Hillary Clinton actually won the popular vote in 2016. Leading up to that campaign, he met with Warren and offered to support her in a challenge to Clinton for the Democratic nomination. Sanders ran himself only when Warren told him she would not.

Krugman takes a minor campaign incident -- a Sanders aide posted an out-of-context video snippet of Biden -- as though it was a political crime, describing it as "bad" almost Trumpian." He adds, "The last thing we need is another president who demonizes and lies about anyone who disagrees with him, and can't admit ever being wrong." In fact, Biden did at one time speak of cutting Social Security cost-of-living increases.

These denunciations coincide with the heavily publicized joint endorsement of Senator Warren and Senator Amy Klobuchar by the editorial board of the New York Times, in a statement published in its Monday print edition.

While the editorial was not headlined, "Anybody but Sanders," that is the essential thrust of it. The Times' effort to boost Warren against Sanders is deemed particularly urgent by the party establishment, given Sanders' rise in the polls in both Iowa and New Hampshire, the first two states where voting will take place in early February. With greater enthusiasm, the newspaper also promotes Klobuchar, rather than former Vice President Joe Biden or former South Bend mayor Pete Buttigieg, as the candidate of what the Times terms the "realist" wing of the Democratic presidential field.

The joint endorsement of two female candidates, one for each "lane" of the nomination contest ("radical" and "realist" in the editorial's phrasing) serves the Times' relentless campaign to inject race and, in this case, gender, into American politics, while downplaying class and economic inequality. Thus the editorial concludes with the injunction, "May the best woman win."

Patrick Martin writes for the World Socialist Website (wsws.org), a forum for socialist ideas & analysis & published by the International Committee of the Fourth International (ICFI).
Related Topic(s): Democratic Party; Democratic Socialist; Hillary Clinton; Party Politics Democratic; Revolution; Sanders-Bernard; Women, Add Tags
Add to My Group(s)
Go To Commenting
The views expressed herein are the sole responsibility of the author and do not necessarily reflect those of this website or its editors.