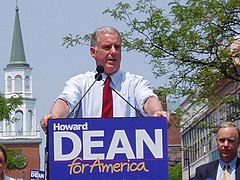 [I used this illustration because Dr. Dean and his brother started Democracy for America. I went all out on this one and sent this poll to thousands of Facebook users in Bernie Groups. Did it tip the scale? I hope so! Although Dr. Dean made it clear that he wanted to get all of the old people out of the political processes".]

"Bernie Sanders has built a powerful multi-racial, multi-generational movement and we're excited to join the campaign at this critical moment in the Democratic race."

Related Topic(s): Bernie Sanders 2020 Endorsements; Democracy For America; Democracy For America Presidential Poll 2020, Add Tags
Add to My Group(s)
Go To Commenting
The views expressed herein are the sole responsibility of the author and do not necessarily reflect those of this website or its editors.