Republished from the Grayzone

Democracy Now has marketed itself as "the exception to the rulers," it is functioning as little more than a force multiplier for the State Department, amplifying Cold War narratives on China behind progressive cover. 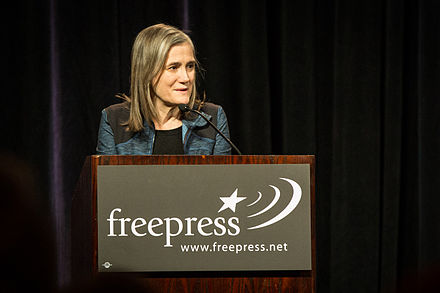 The U.S. has claimed a humanitarian "Responsibility to Protect" to justify military operations in the name of saving civilian lives from evil dictators. Most notable have been the brutal U.S.-led wars in Libya and Syria which destabilized entire regions in the name of "civilian protection" and "promoting democracy." These operations relied heavily on self-described human rights NGO's and media outlets to cultivate support among liberal sectors of the US intelligentsia. Sadly, Democracy Now has been among the most influential and insidious outlets carrying water for the humanitarian interventionist agenda.

The flagship program of the left-wing Pacifica radio network, Democracy Now (DN) and its founding host, Amy Goodman, are regarded as standard bearers of grassroots progressivism. However in recent years the show has become a reliable platform for uncritical regime change propaganda, demonizing targets of US empire from Syria to Nicaragua while sending a correspondent to embed with US-backed "rebels" in Libya. Now that China is in the crosshairs of the US, DN is playing host to virtually any piece of humanitarian agitprop that Washington can conjure up, while publishing a regular serving of sharply negative stories about Chinese government and society.

A review by The Grayzone of every China-related report and interview Democracy Now aired in the past year found that 3 out of every 4 painted China in a decidedly negative light, often echoing narratives emanating from the US State Department. Perhaps its most inflammatory and factually questionable report appeared this February amid an escalating wave of anti-China propaganda.

On February 4th, DN aired a story on the latest moral outrage out of China's Xinjiang Uygur Autonomous Region . It was a report from the BBC, the British Foreign Office-funded media giant that was exposed by The Grayzone as a UK intelligence contractor. Instead of questioning the BBC's report, which appeared custom-tailored to generate public support for the new Cold War, Democracy Now uncritically amplified it.

DN's story opened with the BBC's interview of Tursunay Ziawudun, the singular source for accusations of "mass rape" in so-called re-education camps in Xinjiang. Democracy Now repeated the US-based exile's claims as fact without any investigation into the credibility of the source. Ziawudun is no stranger to the Western press. In fact, prior interviews with Ziawudun reveal several glaring inconsistencies that place her credibility as a source into question.

Ziawudun was first interviewed by a human rights organization in Kazakhstan called Atajurt. The group possesses no formal website or information about donors, only social media accounts. In 2018, directors of Atajurt junketed to Washington DC to meet with the National Endowment for Democracy and various anti-China influencers.

Neither Ziawudun's interviews with this organization nor her testimony to the CIA-created Radio Free Asia mention rape at all. In a feature with Buzzfeed in February of 2020, Ziawudun stated, "I wasn't beaten or abused" The hardest part was mental. It's something I can't explain - you suffer mentally. Being kept someplace and forced to stay there for no reason. You have no freedom. You suffer."

Ziawudun's reflection on her experience changed character after she became involved with the Uyghur Human Rights Project (UHRP). The UHRP was created and is funded by the National Endowment for Democracy (NED), a US intelligence passthrough that was established under the watch of former CIA director William Casey.

The Grayzone exposed the Uyghur Human Rights Project as part of a consortium of groups operating under the World Uyghur Congress (WUC) umbrella, and funded to the tune of tens of millions of dollars a year in US government money to promote the narrative of a Uyghur genocide carried out by China's government.

In September 2020, the UHRP resettled Ziawudun in the United States, flying her from Kazakhstan to the Washington DC area. "Ms. Tursunay is a critical witness"," the US government-funded organization declared in a press release. "Her testimony will be vitally important for future atrocity-crimes determination processes and tribunals."

In a CNN report based on her contradictory claims alleging a Chinese policy of "systematic rape," her Chinese passport briefly appeared on screen. It showed that after all her alleged travails, she was granted a ten year visa to travel abroad as she pleased. Yet CNN reported she "walked across the Kazakh border" in 2019, creating the impression she had to escape from China to tell her horror story. In a subsequent broadcast of its report, CNN blurred out Ziawadun's passport issue date.

Related Topic(s): Journalism, Add Tags
Add to My Group(s)
Go To Commenting
The views expressed herein are the sole responsibility of the author and do not necessarily reflect those of this website or its editors.