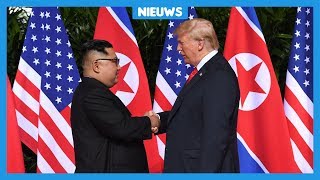 If nothing else, the $20 million-dollar Singapore Photo Opp knocked the Stormy-Cohen-Russia investigation off the telescreens for a few hours. And it provided MSNBC with the most entertaining day of programming we've seen in a looooong time. You must now stop and take seven minutes to watch Nicole Wallace absolutely lose it in a fit of hysteria. Twice. It's a beautiful thing. 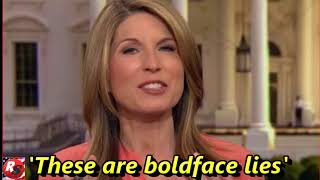 Nicole, you speak for me. Peace, sista.

First in reaction to that Leni Riefenstahl propaganda piece/Michael Bey movie trailer glorifying the N. Korean dictator the White House released today, then again following The Don's remarks at the 4AM presser.

Trump mused about watching the dictator's many threatening ICBM tests, all-the-while thinking to himself: "Look at those incredible beaches...think of the beautiful condos and hotels that could be built there where they are exploding those cannons into the ocean..."

If only, y'know, Kim Jong Crazy would stop threatening everyone with nuclear annihilation and sh*t. Then it could be the new Mar A Lago East!

Nicole Wallace just said it -- WTF is wrong with these people?

Rhetorical question. But with recent news that the Kuschner's made $80 m'effing million dollars last year trading on Big Daddy's position as Con-man in Chief, it does make you wonder if the covert reason The Don wanted The Oval was to fulfill his dream of Real Estate domination by securing flashy Trump properties in every country in the world. Perhaps with secret hidden agenda that the forbidden love of his life Ivanka could market overpriced tacky costume jewelry to racists all over the world.

Kinda like if Lex Luthor had a baby with Leona Helmsley".with a Humbert Humbert complex.

Kathy never expected a career in radio as a talk show producer. Born and raised in Atlanta, Georgia, Kathy was completing her nursing degree when in 2001 - in an emergency - she was asked to fill in as the producer of Mike's program. Within a few (more...)
Related Topic(s): Donald Trump; Kim Jong-un; Nicole Wallace; Singapore Meeting, Add Tags
Add to My Group(s)
Go To Commenting
The views expressed herein are the sole responsibility of the author and do not necessarily reflect those of this website or its editors.