Yes, I know that many people hate Tom Brady and the New England Patriots. And many others couldn't care less that the National Football League deemed Brady a cheater, a liar and a perjurer over the silly Deflategate scandal. But that is why it makes an excellent case study of how a powerful institution and its clever lawyers can make almost nothing into almost anything and get many people to go along.

Very similar techniques are used in more serious circumstances, such as the U.S. government and mainstream media demonizing some foreign leader in marching the American people in lockstep into another war.

So, the moral behind the story of Brady and the NFL is that the public should be alert whenever some powerful institution lodges an accusation against some figure who is widely disliked. The troubling truth is that often a mob-like excitement overwhelms any skepticism, leaving the few doubters of the establishment's claims labeled "apologists" and most everyone else going along.

That was what happened in January 2015 when the Deflategate case began to unfold under the intense media spotlight of a Super Bowl. Brady and the Patriots headed into that game, Super Bowl 49, surrounded by amateur sleuthing into why the Patriots' footballs in the AFC Championship game had tested at halftime below the league standard of 12.5 pounds per square inch or PSI.

In retrospect, we can put together what actually happened: how NFL officials didn't know the physics of the Ideal Gas Law, how the media stampede gathered speed despite a dearth of evidence, and how rival NFL owners then seized on the "scandal" to hobble the Patriots and disgrace Brady. But many Americans, who rely on The New York Times or ESPN, may still believe the charges are credible.

The story began on Jan. 18, 2015, on a cold and rainy night in Foxborough, Massachusetts, where the Patriots were hosting the Indianapolis Colts in the AFC Championship game. 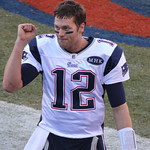 Before the game, NFL officials had set the Patriots footballs for use on their offensive plays at 12.5 PSI -- Brady's preferred number at the low end of the permissible level compared to the high end of 13.5 PSI. The Patriots' AFC opponent, the Indianapolis Colts set their footballs at 13 PSI.

However, because the game was played in the cold and rain, the PSI naturally declined below the 12.5 PSI for the footballs of both teams. But when the Colts intercepted one of Brady's passes in the first half and tested it, they noticed that it was below the legal limit and complained to the officials.

It turned out that no one involved in this initial phase understood the eighth-grade physics of the Ideal Gas Law, which was first promulgated in 1834 and measures how the PSI of an enclosed gas rises or falls depending on the outside temperature.

So, the NFL officials confiscated the Patriots' other 11 footballs at halftime and brought them indoors for a hastily organized effort to test the PSI with two different gauges -- one of which was fairly accurate while the other wasn't -- and found the footballs below the 12.5 PSI standard. The officials then added air to the Patriots' footballs.

Sometime toward the end of the testing, the officials also checked the Colts' footballs, botching one test and running out of time for eight of them but finding the other three were below the 12.5 PSI limit on the gauge that turned out to be accurate but above 12.5 PSI on the inaccurate gauge. No air was added to the Colts' footballs.

The measurements were further compromised by the fact that the longer the footballs remained indoors in warmer temperatures the more they naturally re-inflated. The NFL officials later claimed not to remember the precise chronology or timing of the process, including whether they re-inflated the Patriots' footballs before checking four of the Colts' footballs.

After the game, which the Patriots won 45-7, the balls were checked again with the re-inflated Patriots' footballs above the 12.5 PSI legal standard but the Colts' footballs below 12.5 PSI. In other words, the Colts had played both halves of the game with under-inflated footballs, yet it was the Patriots who came under attack.

Related Topic(s): Bias; Football; Nfl; Super Bowl; Tom Brady, Add Tags
Add to My Group(s)
Go To Commenting
The views expressed herein are the sole responsibility of the author and do not necessarily reflect those of this website or its editors.