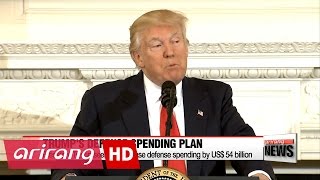 The White House on Monday called for a $54 billion increase in defense spending along with corresponding cuts in non-security agencies. Specific details could possibly be announced when President Trump addresses a joint session of Congress tonight.

Yet is this what we need another nonsensical increase in the already bloated defense budget against contrived "enemies" that pose no threat to the US? But hey, this is the US where nonsensical policies thrive.

But to neo-con war hawk Senator John McCain, "this budget is a mere 3 percent above President Obama's defense budget, which has left our military underfunded, undersized, and unready to confront threats to our national security". Ah, thank you John for your usual over he top comments that you and your fellow neo-cons consistently make to overinflate the "threats" we face.

Some years ago when Joe Lieberman was a senator from Connecticut he said something to the effect, If we don't build these nuclear submarines "we'll be in danger of falling behind". Lieberman didn't specify who it was we'd be falling behind with these $2 billion a piece subs built conveniently in Lieberman's home backyard of Connecticut- but what's amazing is he apparently said this with a straight face and nobody-at least as far as I'm aware-did a guffaw which would have been the appropriate response to his grandstanding.

Terrorists don't have an air force or navy. The only sophisticated weapons they have are shoulder fired missiles or RPG's and the like that were either provided by the CIA-paid for by the Saudi's and the other GCC monarchies, seized from caches the US brought to Iraq after we invaded, abandoned as happened with the Iraqi army when it withdrew from Mosul in the face of ISIS or since 2011 brought into Syria by Islamic jihadist mercenaries trained and armed by the CIA traversing through Turkey and Jordan.

So far as being a threat to the US, imminent or otherwise these terrorists don't qualify.

Russia, China, Iran, even North Korea take up arms in defense of their country. However in the US to the government and its complicit corporate MSM they're all conflated as "enemies", their leaders "demonized", sanctions imposed and provocations made against all is standard operating procedure as all refuse to bow to US hegemony and therefore "enemies" we must oppose.

As said numerous times in this space initiating provocations against nuclear armed Russia and China is absolute madness. This didn't occur in the cold war with the Soviet Union when the reality of Mutually Assured Destruction (MAD) was clearly, unmistakably understood by all sides.

It is only since the February 2014 coup in Kiev, Ukraine this new cold war initiated by the US has come about. Bellicose statements of Russia "invading" Crimea-they were there legally as per a lease agreement with the Ukraine government to house the Russian Black Sea Fleet in Sevastopol-bellicose statements of Russia invading eastern Ukraine-never happened, downing the Malaysian airliner in eastern Ukraine-evidence showing Ukraine jet fighters in the vicinity plus the post coup Ukraine army the only ones with SAM's capable of reaching the height of the airliner which the eastern Ukrainian separatists did not possess- preparations to invade the Baltic countries which is absurd with Russia knowing invading any NATO country would require all other NATO countries to respond militarily, now the unrelenting demonizing of Russian President Vladimir Putin personally authorizing the hacking of the DNC, helping Trump get elected ad nauseam.

Then there's the Trump administration getting apoplexy over Iran test firing conventional missiles-allowed under the P5&1 nuclear agreement with Iran last year, Chinese militarism-constructing man made islands in the South China Sea, an area China considers within its sovereign jurisdiction which other countries mainly Viet Nam, Brunei, Malaysia, the Philippines also have claims but has always been a local issue until the US interjected itself claiming "freedom of navigation" as justification to enter these local disputes, yet China has never interfered with any nations commercial vessels traversing the South China Sea. And even N. Korea test firing missiles all are conflated as "offensive" measures by the US with no understanding, actually incomprehension that these countries take these measures in defense of their country because of potential US aggression against them.

So clearly, it's the intent of the US Deep State to conflate these countries as "threats" to the US.

The whole defense spending edifice the deep state has erected is nothing more than a house of cards built on the premise of having "threats" and "enemies." Without them the edifice collapses.

And consider this, how is peace in the world possible without that edifice come crashing down?

Retired. The author of "DECEIT AND EXCESS IN AMERICA, HOW THE MONEYED INTERESTS HAVE STOLEN AMERICA AND HOW WE CAN GET IT BACK", Authorhouse, 2009
Related Topic(s): Government; Hegemony; Policies; Provocation; Threats, Add Tags
Add to My Group(s)
Go To Commenting
The views expressed herein are the sole responsibility of the author and do not necessarily reflect those of this website or its editors.