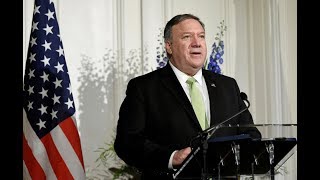 Politico reports that Chewning will be leaving at the end of the month, and is departing to spend more time not enabling war cri -- sorry, is leaving for unspecified reasons for a new job in the "private sector." The involved parties, or at least the ones talking, appear to be intent on painting this new departure as routine.

That's a bit eyebrow-raising; in general, senior defense officials do not start heading for the exits in the weeks before their nation undertakes a dramatic new escalation of military force.

Behind the scenes, though, Esper's office appears to be in turmoil. A Foreign Policyreport on Sunday revealed that Trump Defense Secretary Esper had cut senior Pentagon leaders out of the loop on the Suleimani assassination, and that the Joint Chiefs of Staff were not consulted or briefed on the operation ahead of time. "The usual approval process, the decision-making process, did not occur," an anonymous defense official told FP.

And while the Pentagon appeared to attempt to weasel out of responsibility for the decision with a New York Times-reported claim that the option of striking the senior Iranian military leader during a diplomatic mission in Iraq was not intended to be a "realistic" proposal, but only an extremist option meant to make other options look more palatable, that reporting is implausible.

In fact, it seems to be another administration lie: other reporting notes that Secretary of State Mike Pompeo, deeply involved in the Ukraine extortion scheme that led to House impeachment articles against Trump but still firmly in his post, has for months been pressuring Trump to assassinate Soleimani.

Were the string of top Pentagon resignations in the last few weeks due to Esper's move to cut opposition voices out of the decision-making process, when presenting Trump with extremist options intended to escalate the chances of a new Iran war? Or did the departed officials know what the Trump Team was intending? We don't know. On the eve of another new shooting war, we don't know anything.

Related Topic(s): Assassination; Iran; Pentagon; Resignations; Secretary Of Defense; Secretary Of State Mike Pompeo; Trump Scandal; Trump Warmonger, Add Tags
Add to My Group(s)
Go To Commenting
The views expressed herein are the sole responsibility of the author and do not necessarily reflect those of this website or its editors.