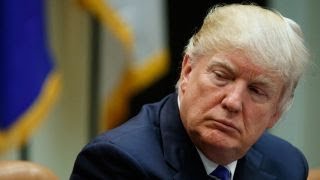 The ascension of Donald J. Trump to the US presidency is not the fault of a single social group or political faction. It was rather a broad societal failure borne by all Americans.

We have become a society obsessed with convenient solutions, fixated on self-interest, and immune to human suffering. What leader could better personify those traits than Donald J. Trump?

Still, the harm Trump is doing to the country from the Oval Office under the cloak of the presidency is all but incomprehensible. The indelible mark of disgrace he is branding on the country's soul and honor will not be washed away for generations.

Yes, it is of paramount importance for the country to unify in an effort to remove this charlatan who would be President from the heart of our nation's government.

There seems to be an odd notion that the only way to remove Trump from office is by popular election. That is a colossal red-herring argument and a convenient one at that. If true, the President is in fact above that law.

The Mueller report contains enough evidence of illegal conduct and collaboration with a hostile foreign power to justify the impeachment of 10 presidents. Further, the oft-cited OLC memo that has become the guiding legal authority on indicting a sitting president is totally unproven and untested in the courts. Yet it seems to have been mysteriously elevated to holy grail status by an American political system now more comfortable with the specter of autocracy than at any time in our history. If ever there was a time to test the OLC memo, that time is now.

As it may well come to the 2020 election to remove Trump from office, it is vitally important that the public discourse about how to do that be elevated. The urgency is palpable.

There seems yet another illogical concept guiding the political decision-making process as well. The proposition is presented that a candidate with poor popular support is better suited than candidates with far greater popular support. That notion makes so little sense it demands suspicion.

The process of choosing a challenger to Trump is no formality. Rather it is an essential contest. The challenger must prove himself or herself worthy of the main event in open competition with peers and rivals alike.

The best candidate will be the winner of a fair and transparent nominating process, not the chosen one. What is at stake is immeasurable.

Related Topic(s): Trump Against Democracy; Trump And Bolton; Trump Conflict Of Interest; Trump Crime; Trump Impeachment, Add Tags
Add to My Group(s)
Go To Commenting
The views expressed herein are the sole responsibility of the author and do not necessarily reflect those of this website or its editors.