The elite news anchor is the eunuch: "trusted everywhere" 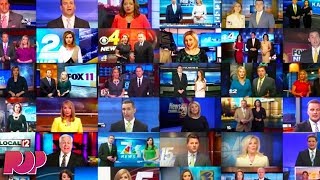 It's not only the content of news that is embraced, it's the style, the manner of presentation -- and in the long run, the presentation is far more corrosive, far more deadly than the content.

The imitations of life called anchors are the arbiters of style. How they speak, how they look, how they themselves experience emotion -- all this is planted deep in the brains of the viewers.

Most of America can't imagine the evening news could look and sound any other way.

That's how solid the long-term brainwashing is.

The elite anchors, from John Daly in the early days of television, all the way to Brian Williams (until he was exposed) and Scott Pelley, have set the tone. They define the genre.

The elite anchor is not a person filled with passion or curiosity. Therefore, the audience doesn't have to be passionate or filled with curiosity, either.

The anchor is not a demanding voice on the air; therefore, the audience doesn't have to be demanding.

The anchor isn't hell-bent on uncovering the truth. For this he substitutes a false dignity. Therefore, the audience can surrender its need to wrestle with the truth and replace that with a false dignity of its own.

The anchor takes propriety to an extreme: it's unmannerly to look below the surface of things. Therefore, the audience adopts those manners.

The anchor inserts an actor's style into what should instead be a relentless reporter's forward motion. Therefore, members of the audience can become actors shaping "news" about their own lives through Facebook.

The anchor taps into, and mimics, that part of the audience's psyche that wants smooth delivery of superficial cause and effect.

From their perch, the elite television anchors can deign to allow a trickle of sympathy here, a slice of compassion there.

But they let the audience know that objectivity is their central mission. "We have to get the story right. You can rely on us for that."

Related Topic(s): Brainwashing; Empire; News Anchors; Propaganda; Television, Add Tags
Add to My Group(s)
Go To Commenting
The views expressed herein are the sole responsibility of the author and do not necessarily reflect those of this website or its editors.